I’ll be the first to say that I rarely watch late night television. It has to be something spectacular to make me watch anything past the evening Monday through Thursday episodes of The Daily Show with John Stewart. That said, I’ve known that Craig Ferguson is a funny guy ever since he played the evil boss on The Drew Carey Show back in the late 1990s. And whenever we see a clip from The Late Late Show with Craig Ferguson on This Week with George Stephanoploulos during their “Sunday Funnies” segment, I think I should start watching The Late Late Show — alas, I’m typically asleep by then. 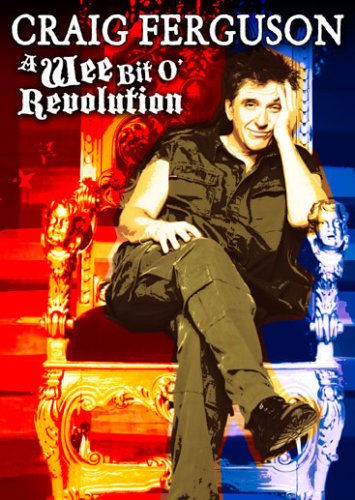 At any rate… Craig Ferguson recently had a new comedy special appear on Comedy Central called Craig Ferguson: A Wee Bit o’ Revolution and it was released on DVD just a couple of days later. He is a very funny man with a unique perspective based on his being raised in Scotland and gaining citizenship in the United States (he has dual citizenship in the US and the UK). He truly has a love for America.

Wee Bit o’ Revolution was recorded in October 2008 at the Wilbur Theatre in Boston, Massachusetts. Ferguson freely shares his views with the audience on sex, drugs, and rock and roll in his own particular no-BS way. It’s great to see him speak without the typicaly boundaries he must face on late night television – freely able to swear and share suggestive gestures!

He starts by talking about how he came to be an American after a visit to New York as a teenager and being exposed to his first rock concert (Blue Oyster Cult) and smoking a doobie. He compares that to going to his second concert in Scotland after that and trying to get some drugs (very tough to come by in Scotland). A friend of a friend hooked him up with some chloroform and he passed out as Deep Purple hit the stage, only to wake up as they’re going off. You have to love the irony.

Ferguson also talks frankly about his drug and alcohol abuse and speaks fondly of the time he spent in rehab for his alcoholism. The other drug users sort of looked up to Ferguson as “only an alcoholic” since they had more detrimental addictions to get over. So he always had fun messing with their heads.

And he talks about auditioning for a part on Suddenly Susan with Brooke Shields and then finding work on The Drew Carey Show as the insane English boss. For me, that’s one of his more memorable roles. But now that I’ve seen his stand up routine, I may have to see if he’s playing anywhere near me anytime soon.

In addition to his stand-up routine, there are also two extras. His Interview was hilarious, but I was fascinated by his Speech at Faneuil Hall on July 4, 2008. It’s always interesting to me to see how people who weren’t born here really become the true patriots for our country when they become citizens. Ferguson speaks eloquently and with humor about what he loves about the United States.

Ferguson is hilarious and it’s hard for me not to laugh with his self-deprecating humor. He really lays it out on the line for the audience and points out where he thinks his own life is funny. I have to respect that.

So be sure to check out Craig Ferguson: A Wee Bit ‘o Revolution to see what they bleeped out on national television!

p.s. Be sure to check out the DVD at your local rental store or pick it up from Amazon: