In an age of overblown action movies, it’s refreshing to see lower budget films stick to the basics — plot, character, and setting. There were no huge explosions in this pictures. No James Bond equipment from Q-branch. And when they beat up cars during car chases, we’re not talking about fully customized Aston Martins. 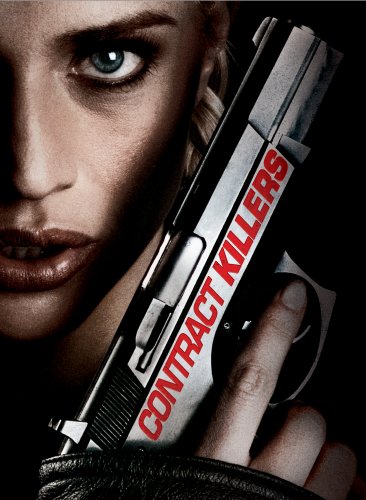 Contract Killers was cowritten by Ric Moxley and director Justin Rhodes. The story focuses on Jane, a black operations agent for the CIA (i.e. not one on the books). She’s leading a happy, normal life with her husband when suddenly… he’s dead, she’s running from the law, and she has to find out why.

What’s great about this movie is how gritty it is. Bullets fly, people die, and corruption runs deep.

What’s not so great is the acting. I’ve never run across Frida Show before (Frida Farrell in the credits for this film), but I can’t say I’m all that impressed. Perhaps it was her take on the character of a hardened intelligence operative, a killer, as cold and distant. But she could have done better expressing some of the complex emotions of a character on the run and trying to figure out why.

However, for me the script worked. It just needed a better cast to bring it to life. Yes, the elements are tried and true in spy movies. An agent is wrongly accused of a crime and must fight to stay alive and prove her innocence. Other agents are sent after her and innocent civilians are endangered during the pursuit.

The same formula has been used to good effect in other movies, including the Bourne series. It just never quite worked in this case.

One of my favorite scenes in the movie, was Jane’s escape after she discovers her husband dead at the beginning of the film. In a very short amount of time, she assembles what she needs and formulates an escape when her house is surrounded by FBI and SWAT agents.

The other great scene is the final battle in the factory. Jane and the other agent she convinced of the truth take on a group of police and another intelligence agent sworn to bring back the item Jane had in her possession. The factory had the right amount of open and cramped spaces to make for a tense gunfight in the end.

As far as extras on the DVD, there really weren’t any. There’s a music video called “Toro Toro” by Rachel Montano Featuring Shaggy and some previews. The trailer for Way of War starring Cuba Gooding Jr. looked interesting. The other previews for Smoke Jumper, Sharks in Venice, and Retrograde.

Was this a great film? No, but it’s definitely worth a look as a renter. I’ll give it 2 out of 4 stars just because it wasn’t horrible. Great idea… not so great execution.

p.s. Check out this movie at your local rental store (Netflix is my fave) or pick it up from Amazon: