Who knew that Westerns still existed? Just kidding, but other than feature films like Appaloosa or 3:10 to Yuma, I can’t say that I’ve seen many in recent memory. And before those two, I think Unforgiven back in 1992 was the only I can remember with certainty. So to see an independent Western distributed by North American Motion Pictures was unique enough to get me to take a look. 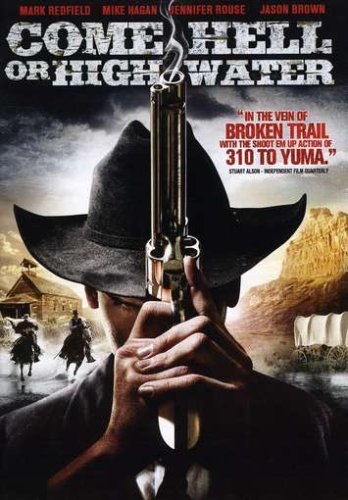 Come Hell or High Water, set in post-Civil War Missouri, is the story of Captain Justin Gatewood (Mark Redfield) who has been released from Fort Leavenworth prison with a pardon from the Governor. Gatewood served five years of a longer sentence for attempting to kill William Curry (Mike Hagan) and wounding the local sheriff in the process. During the war, Gatewood’s brother died while he and his brother were prisoners of Curry on a forced march from a battlefield. After a failed attempt to kill Curry five years ago, Gatewood is more than a little bitter about his situation and wants revenge. He’s had time to plan and nothing is going to get in his way, even his daughter.

When Gatewood gets back to town, he finds that his adversary is a wealthy business owner now. But that doesn’t stop him from gunning for Curry and the whole town gets stuck in the middle, including both of their daughters, Helen Gatewood and Catherine Curry.

For being done by an independent film company, I have to say I was impressed by the quality of the picture. Presented in widescreen, the picture is clear and uses an almost-sepia color palette to make it appear more aged. The story, written and directed by Wayne Shipley, captures the wildness of the west during an era of great expansion and the addition of law and order.

The acting is a bit of a mixed bag, and the makeup/special effects don’t really work when you look closely. But the settings and set dressings seemed very accurate. And the writing won me over. Gatewood had the best lines in the movie, often quoting Shakespeare or contemporary playwrights with ease.

Though Westerns are still not really my favorite genre of movie, I have to say that Come Hell or High Water worked for me. The acting wasn’t great in spots, but I thought the setting and story rang true, which made up for it in most places. The thought that a man would hold a grudge for 25 years following the war isn’t hard to believe. The period of Reconstruction after the Civil War was one full of hard feelings on both sides of the war and for some families has lasted into the 20th century and beyond.

Other than a few trailers for other movies from North American Motion Pictures, there were no extras on the DVD.

As an independent Western not backed by one of the major studios, I thought Come Hell or High Water was a solid attempt at a feature movie with a small budget. I will continue to say that I have great respect for independent filmmakers and small studios for they have a rough road not only to create a film, but to get it distributed. So though Come Hell or High Water can’t compete with the latest 3:10 to Yuma, I thought it was a fine movie and give it a solid 2 out of 4.

p.s. If you’re a lover of Westerns and are looking for something new, be sure to check Come Hell or High Water out at your local video store or on Amazon: