Before diving into this box set of 11 episodes from season two of Cities of the Underworld, I knew little more than what I’d seen on the occasional commercial on the History Channel. I had no idea that Don Wildman explored such amazing places. Now I’m a fan and have a season pass on my Tivo! 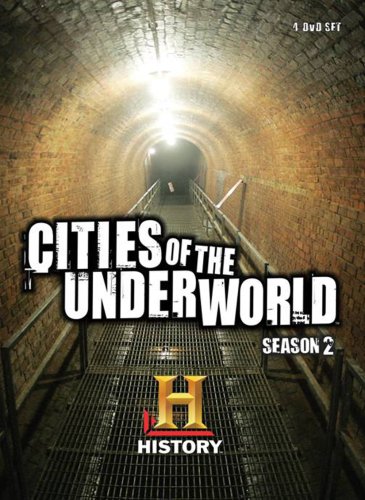 For those who don’t know, Cities of the Underworld is a series on the History Channel where host Don Wildman explores the dark places that most of us forget exist beneath the urban sprawl that consumes most of our daily lives. Beneath city streets in unlikely places, he finds tunnels, abandoned train lines, dungeons, tombs, hideouts, and entire cities buried for years.

Wildman brings a childlike curiosity and explorer‘s spirit to bear on these places and I have to admit I found it hard not to get caught up in his enthusiasm. Whether exploring modern man-made structures from the last 10 years, or exploring caves and ruins from thousands of years ago, you too want to see what Don finds “awesome” in his travels.

Season Two takes you all over the world to places that you may not have even suspected still existed or ever existed. The eleven episodes include everything from sites in New York and Tokyo, to Viking and Mayan ruins, and the hidden battles in Israel’s tumultuous history.

“A-Bomb Underground” explores places above and below Tokyo’s busy streets to show us structures built to avoid not only earthquakes, but flooding — and even Atomic bombs. Don even talks to a survivor of the blast at Hiroshima during World War II, which was fascinating. A school girl at the time, she still remembers August 6, 1945 like it was yesterday.

In “Maya Underground”, Don goes deep into the jungles of Belize to explore Mayan ruins both aboveground and in caves representing the Mayan underworld. As we approach 2012 and the end of the Mayan calendar, it’s unbelievable to see the sprawling Mayan ruins from their huge civilization that collapsed because it couldn’t sustain itself.

“New York Secret Societies” brings you into the underground world of New York during the Prohibition when mobsters ran much of the city, hidden subway tunnels, and even a tunnel made by the Freemasons. With so much activity in the city that never sleeps, it’s amazing to know what went on beneath those same streets!

And “Secret Soviet Bases” takes you back into the Cold War and forgotten battles of World War II. Don explores an amazingly intact nuclear submarine base and the bunkers beneath a fake apartment building built to survive World War III.

With a mix of Don’s infectious personality, history buried beneath our feet, and very cool computer generated graphics to help illustrate the complexity of some of the structures explored, Cities of the Underworld proves once again that history does not have to be dusty and boring!

Be sure to check out the Cities of the Underworld: The Complete Season Two DVD collection!

p.s. Pick up Cities of the Underworld at Amazon: