Don Wildman is back and exploring the dark, unseen corners of the world in the 13 episodes of Cities of the Underworld: The Complete Season Three. Once again, Wildman finds adventure in the unlikeliest of places, bringing stories to life previously unheard and unknown by the public. 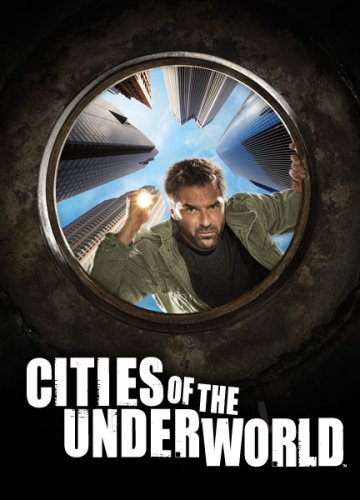 As with the previous seasons, host Wildman gets down, dirty, and sometimes dangerous going into the amazing and forgotten places that sometimes lay right beneath our feet in each episode of Cities of the Underworld. We often forget that over time, human habitation tends to reuse good locations – sometimes going as far as building on top of the ruins left by prior generations.

And with almost childlike enthusiasm and curiosity, Wildman enters the unknown with a camera crew and cool surveillance equipment to share his discoveries. That’s part of what makes the series work. Wildman exhibits the same fascination with these places as normal people would. And luckily for us, he gets dirty and we get to watch from the safety of our living rooms.

In Season Three, Don explores historical sites from both modern and ancient times, sharing not only his own observations, but the stories of others who share his passion for the past. From Los Angeles and Las Vegas to ancient Ethiopia and Rome, he takes us to places and times we may never see any other way.

“Land of Manson” takes us behind the scenes of bootlegger hideouts beneath the streets of Los Angeles where crooked cops aided and profited from the illegal liquor trade of the Prohibition. From there, we visit a forgotten “Ghost Station” from a lost subway system in Los Angeles shut down by the auto industry to kickstart car sales. And then we see the Death Valley ranch where Charles Manson and his girls lived away from prying eyes in the time before they were convicted of murder.

In “City of Blood” we go beneath the streets of London to the many dark, dank places where infamous killers such as Jack the Ripper and Sweeney Todd would hide their nefarious activities from the authorities trying to stop them. We also learn of the body thieves stealing fresh corpses and selling them to medical schools when such bodies were hard to come by legally.

And in “Tunnels of Hell” we learn more of Okinawa during the dark days of World War II. One of the war’s bloodiest battles was fought on and off the islands’ shores and many thousands of soldiers and civilians alike lost their lives fighting for what they believed in. Wildman even dives deep enough with special scuba gear to see one of the U.S. Navy ships downed by kamikaze pilots during the battle, capturing amazing images of the holes blown in the sides of the vessel and the monument placed there much later commemorating the deaths of those on board.

Wildman makes the history of these places come alive through his own narration, interviews with experts, and first-hand accounts of more modern events, making this a fun and educational program. If you haven’t seen it yet, I recommend you check out Cities of the Underworld on the History Channel and the Cities of the Underworld: The Complete Season Three DVD collection. Who says history has to be boring?

p.s. Click below to pick up the Cities of the Underworld DVD sets at Amazon!