About six months ago, I reviewed Care Bears: Tell-Tale Tummies with my two daughters. The DVD featured a collection of eight episodes from the animated series that aired in 2007. We’ve really enjoyed these cute, cuddly characters telling stories aimed at kids in preschool and early elementary. Each episode focuses on a valuable lesson in a very kid-friendly and accessible manner. 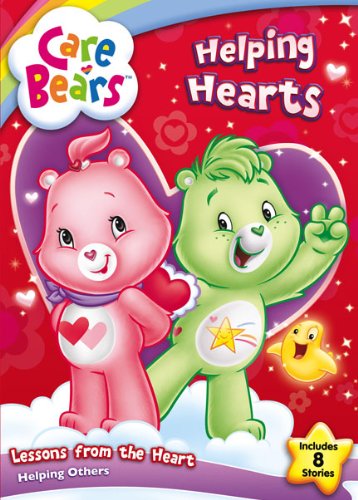 If you’re not familiar with the Care Bears, they started as an idea for a line of greeting cards at American Greetings in 1981. Each bear has a unique “belly badge” denoting their magical abilities. For example, Funshine Bear has a sun on his belly and is all about helping his friends have fun. And Cheer Bear has a rainbow on her belly and tries to keep everyone upbeat and cheerful. In 1983, the bears became a very popular series of stuffed animals and the phenomenon began to spread…

By the mid 1980s, the Care Bears had three feature films and their own television show. And it was all rebooted for a new generation in the early 2000s, just in time for all the parents who grew up in the 80s to pass the craving for cute bears down to their own kids. I wasn’t a huge Care Bears fan growing up (though my sister, 5 years my junior, definitely was). But now as a parent, I have to admit that the cartoons provide solid role models and lessons that my daughters can relate to.

Now Lionsgate has released eight never-before seen episodes from the same series and these Care Bears episodes all focus on themes of friendship, responsbility, asking for help, and more — all good lessons for boys and girls growing up and getting ready for preschool or kindergarten. It’s amazing that these bears have not only survived but thrived when so many other cartoons from the 1980s have faded from that same era. I just think it proves that good television for kids can be entertaining and educational if done right.

Included among the eight episodes are:

As you can see, these are simple messages that come through loud and clear as the bears work through problems together. We can all use little reminders like that now and again.

In addition to the episodes, the DVD features “Direct Play,” which allows kids to simply play the DVD without additional assistance from a parent. I know that my youngest daughter, almost 5, definitely benefits from this simpler approach to playing a DVD rather than having to navigate a DVD menu.

If you’re a parent searching for entertaining stories and good lessons for kids, Care Bears: Helping Hearts provides eight great reasons to check it out!

p.s. Pick up this Care Bears DVD and others from Amazon!