Back in the 1980s, my sister was absorbed into the Care Bears collective. Created in 1981 by American Greetings for greeting cards, these cute pictures of bears were turned into a series of stuffed animals, gained their own television series, and even starred in three feature films. And every so often, a franchise like the Care Bears must be reborn, and in 2002 and 2007 these cuddly, lovable characters were reintroduced to the world. They even celebrated the 25th anniversary of the toy line back in 2007. 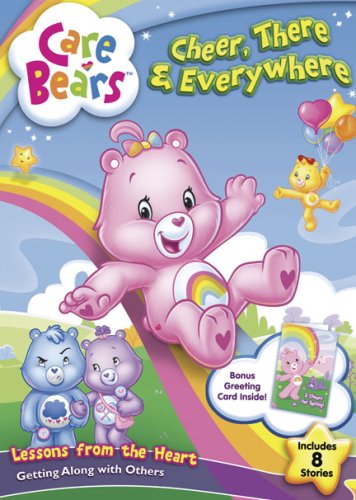 For those of you who don’t know or who have remained blissfully unaware of the Care Bears phenomenon, each bear is a different color and has a different symbol on its belly. They made ten different bears initially, but the population has grown wildly each time the franchise was reintroduced. A few of them were:

In 2007, there was a new Care Bears animated television series introduced, and it used five of the bears as main characters: Share Bear, Cheer Bear, Funshine Bear, Grumpy Bear, and Oopsy Bear. The Care Bears: Cheer, There & Everywhere DVD set that was just released includes eight different stories from the series.

The goal for the series was to provide a set of role models for younger children to teach how to deal with things they’d face while growing up. Lessons about friendship, helping others, and using your talents are among those on the stories included.

Stories included on the DVD are: “Growing Pains”, “King Grumpy”, “Cheer, There & Everywhere”, “A Case of the Grumpies”, “Gobblebugs”, “Grizzle-ized”, “Two of a Kind” and “Stand up and Cheer”.

I watched the DVD with my youngest daughter (age 4) and she was entranced by these cuddly creatures. The stories are excellent. Lessons of how to deal with feelings of jealousy and how not to take advantage of your friends were great at this age. It’s funny how a 25+ year old franchise still has what it takes to get kids watching!

In addition to the 8 stories, you get a Belly Badge Matching Game on the DVD. The game has you match up the bear shown with the right picture out of a set of four choices. (I watched with my daughter and honestly couldn’t remember which picture went with which bear!) And like many of today’s DVDs for kids, this is a Direct Play DVD, which makes it easier to start right into the cute Care Bear action.

If you have little kids, especially little girls, I highly recommend this cute Care Bears series. You can find Care Bears: Cheer, There & Everywhere at your local rental or video store.

p.s. Pick this up at your local video store or on Amazon: