Genghis Khan. Ruler of the Mongol Empire that stretched from China to Eastern Europe. His name alone evokes an image of scores of fierce horsemen working together to conquer most of the Eurasian continent in the 1200s. Even today, tales of his exploits are legendary.

The film By the Will of Genghis Khan follows the story from before his birth to his rise in power. Like many legendary figures, his story is one of heroic highs and tragic lows and this film shows it as such. I was struck by the parallels with other mythic characters in history. His trials present obstacles he must work around and learn from. But like the hero from Joseph Campbell‘s The Hero With A Thousand Faces, his life experiences show him as both being human and more than human with the gift to come back from each trial stronger than before.

When he gets married and his pregnant wife is stolen from him, he begins gathering the forces he will need to find her again. From that point on, he amasses power and friends into a massive force he uses to affect change everywhere he goes. Of course, not everyone is on board with his plans and both politics and ambition get in the way occasionally. Though he fights for peace, he must start and win a war.

Through it all, I felt a humility and a strong sense of honor. The old ways are followed, from sacrifices to the spirits, to marriage ceremonies and honoring the gods after the birth of a son. Rites, rituals, and laws guided the actions of these people from the steppes. The Mongols were a simple people who lived off the land and fiercely defended their way of life.

Shot on location in Russia and Mongolia, the cinematography is simply breathtaking in places. All the seasons are represented beautifully and you can see why the Mongol people would fight for their land.

However, though I appreciate the artistry and intent behind the picture, I have to admit that it felt ultimately like a marketing campaign for Genghis Khan. I wanted to like By the Will of Genghis Khan more than I did, but I’d encourage you to check it out if you’re interested in learning more about this larger than life character from history.

p.s. For more about the movie or Genghis Khan, see below: 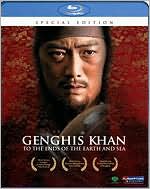