Imagine if you will a television series with the dry wit of House, the improvised gadgetry of MacGyver, and the spy games of the Bourne Identity. Then you might have an idea of what Burn Notice is like before you watch it. 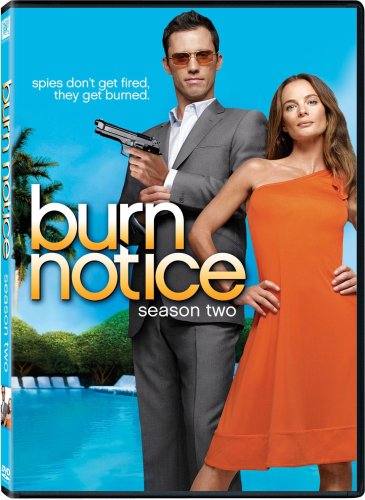 I have to admit when Season One started airing on the USA Network, I avoided it thinking it would be formula and boring. But I caught myself watching when Season Two began airing last summer. And then it was too late for me. I’d been ensnared by the witty dialog, clever contraptions, and a great pairing of writers and actors.

At that point I went to Hulu and began watching all the episodes I’d missed from Season One. And then I made sure I caught all of Season Two when it aired. I was hooked.

Now Season Three has begun to air and the DVD set for Season Two just hit the shelves. If you haven’t watched, I recommend checking out the first season for some background on the characters. Here’s a brief rundown of what’s been going on so far…

Michael Westen (Jeffrey Donovan) is a burned spy stuck in Miami, Florida, working to clear his name so he can go back to work for the CIA or whatever agency he’d been working for before he was burned. To be burned is to basically be dumped unceremoniously in a city with no money, no credit cards, no bank accounts, and no belongings beyond what they leave on your person. Westen was burned two years ago and has been doing odd jobs helping people in Miami ever since as he tried to piece together who burned him and why so he could find a way to repay the kindness.

Westen has two friends in town – Fiona Glenanne (Gabrielle Anwar) and Sam Axe (Bruce Campbell). Fiona is an ex-girlfriend, ex-IRA operative with a penchant for violence, guns, and explosives. She also dabbles as an arms dealer, apprehends bail jumpers, and helps people occasionally. Axe is retired FBI and someone who had investigated and watched Westen in the past for the Feds. Both Fiona and Sam have proved their loyalty to Westen many times over during the last two seasons (though Sam’s loyalty was in doubt during the first season).

In addition, Westen also has family in and around Miami. His mom, Madeline (Sharon Gless), is a chain smoking force of nature who is constantly trying to get Michael out of whatever trouble he gets himself into. Nate Westen (Seth Peterson) is Michael’s younger brother who tends to get himself in a different type of trouble – whether it be with get-rich-quick schemes or gambling – and tries to help out Michael when he’s not trying to save his own skin. Nate doesn’t appear often, but Madeline appears regularly. Fiona, Sam, and Michael often take advantage of Madeline’s house to hide “clients” or lay low from time to time.

Michael, Sam, and Fiona contract out to do odd jobs for clients. Sometimes it’s finding people who don’t want to be found… Sometimes it’s retrieving lost objects or money… But each job takes Westen squarely into conflict with various mobsters, con men, spies, thieves, and killers. Along the way we get to see many of Westen’s talents and skills, as well as those of his friends.

In Season Two, in addition to doing various jobs for his clients, a mysterious woman named “Carla” forces Michael to help with her own plans. Carla may have burned Michael so that he could come work for her organization, but she causes all kinds of trouble for Michael by threatening his family and friends if he doesn’t do what she says. Of course, Michael doesn’t take anything lying down and does his own investigation into Carla’s organization and motives.

Though Season One had a few moments where the stories began to fall into “client of the week” repetition, Season Two led us down a winding path helping clients and seeing what Carla has been up to all the way up to the explosive season finale. The first season was fun, but the second took things to a whole new level.

The Burn Notice, Season Two DVD set includes four DVDs with all 16 episodes, a gag reel, a couple of deleted scenes, and commentary for the season finale from Matt Nix (creator and writer), Bruce Campbell, and Michael Shanks (who played Victor, a rival spy, and is best known as Daniel Jackson in the Stargate SG-1 universe).

The gag reel is hilarious and features various goofs and gotchas caught on tape during the filming of the second season. Donovan, Campbell, and Anwar are featured in the clips, which include everything from equipment and prop failure, forgotten lines, and giggling fits.

But the commentary provides some interesting insights from series creator and writer Nix as well as amusing anecdotes from Campbell and Shanks. The trio has nothing but praise for director Tim Matheson (who also appears in the “Double Booked” episode earlier in the season).

If you haven’t been addicted to Burn Notice by now, with two seasons on DVD, it’s a great time to get caught up. Season Three stands on its own (airing Thursday nights on the USA Network), but it’s always good to have a bit more background on the characters. Be sure to pick up Burn Notice, Season Two on DVD at your favorite retailer and support this great series!

p.s. Pick up the 1st and 2nd seasons of Burn Notice at Amazon today! 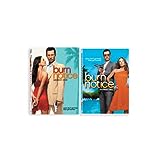