Usually I have a pretty open mind about the comedy of the absurd, and the Coen’s have courted the absurd on a regular basis in their movies. I’ve missed a few movies along the way, but the ones I’ve seen have normally engaged my imagination, my funny bone, or something. 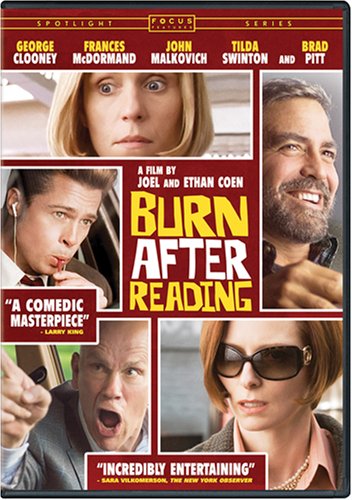 Barton Fink was the first bizarre Coen production that really made me sit up and take notice. And then Fargo and O Brother, Where Art Thou piqued my interest again over the following years. Last year (2007) we had No Country for Old Men which gained worldwide interest for the Coens again…

So when I say that I was actually looking forward to seeing Burn After Reading, you know I’m telling you the truth. The Coens’ have a track record. A proven ability to create unique cinematic experiences that I could get behind.

Well, let’s just say I’m confused by Burn After Reading. This is a movie with an amazing cast that did absolutely nothing for me (or my wife). The first 30 minutes were tough enough to get through, but even at the end I was wondering what the heck was going on and why we were watching these strange, lost people go through the motions.

The movie revolves around a mysterious CD that shows up on the locker room floor in a gym. Two employees, Chad (Brad Pitt) and Linda (Frances McDormand), try to ransom it back to the owner, angry ex-CIA man Osbourne (“Oz”) Cox (John Malkovich). Add that a few other bizarre, selfish characters such as Katie (Tilda Swinton), the conniving wife of Osbourne Cox, and Harry Pfarrer (George Clooney) and his wife Sandy (Elizabeth Marvel), and you have a mess of self-involved, money hungry, power mad characters who are really tough to watch on screen.

Brad Pitt was one of the high points, simply because he seemed to take so much joy in playing the vacuous and child-like Chad from the gym.

This movie received a ton of great press when it was in the theater and many people seemed to love it. I’m left scratching my head and wondering why.

The DVD includes a few extras as well.

“Finding the Burn” has the Coen’s and the cast talking about how the movie came to be and what it’s about. A group of middle-aged people dealing with failing careers, failing relationships, and what happens when the CIA meets the world of the gym.

“DC Insiders Run Amuck” talks about how the Coen’s brought together this all star cast for their movie — all of these stars playing middle-aged, less than bright people with such weird lives is quite entertaining.

“Welcome Back George” focuses on George Clooney in his third time working with the Coen brothers. You can tell that George, Ethan, and Joel all have tremendous respect for each other.

The Coens didn’t do it for me this time, but if you’re a Coen Brothers fan and want to check out Burn After Reading it will be released on DVD and Blu-Ray on December 21, 2008.

We give this one 1 out of 4 simply because we didn’t enjoy it and didn’t think it was well done. Hopefully the next Coen affair will be better!