Did you watch the trailers for Aliens in the Attic when they were on television and in movie theaters and cringe inwardly? I was there with you. This flick had all the earmarks of a trainwreck… A mix of animation and live action? Check. A young cast trying to expand their careers? Check. Alien invasion? Check. The list goes on… But was it really as bad as people said? Not really. Some parts were actually funny and others were almost touching. 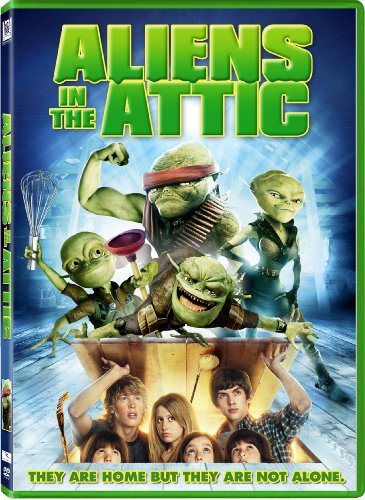 Unfortunately, they have some univited guests who start causing havoc. A group of aliens arrive as a scouting party for a bigger invasion force.

Many of the funny scenes were shown in the trailers, including the battle royale between Grandma and Ricky as mind-controlled puppets. All of the scenes where Ricky and Grandma were implanted with the mind-control device were really quite amusing. There’s something about idiot boyfriends and sweet old grannies going toe to toe that is absurd enough to keep you laughing. The fact that the mind control didn’t work on the children was a fun plot device to keep the battles mainly between the kids and the aliens with the adults only occasionally getting in the way.

The aliens had a lot of personality as well, considering that they were CGI. Voiced by Thomas Haden Church, J.K. Simmons, and others, each had his or her own way of looking at the world. And though they were about 2 feet tall and kind of mean, they were violent in mainly cartoonish ways – so this was never too scary for my kids.

It also seemed that writers Mark Burton and Adam Goldberg had a good grasp of using what was at hand in the house for the warfare between the kids and the aliens. The kids were putting together potato guns and using firecrackers in the air ducts to keep the aliens with better technology at bay.

Most of the almost touching moments were between Stuart and Tom. Theirs was a father-son relationship that had become strained as Tom tried to deal with being a smart geek in school who was always picked on by the cool or athletic kids. To rebel, he decided to fail his classes to try and fit in with the “cool” crowd, which only succeeded in making his parents upset with him. By the end of the film, Tom decides he’s ok with being a smart kid, since it was his smarts that helped save the planet from the pint-sized aliens.

Really it wasn’t too bad. And my two girls (ages 4 and 8) giggled their way through most of it, so I think they had fun too.

In addition to the movie, there are a number of features included on the DVD. Ashley Tisdale is featured in the “Introduction to Film,” the “Introduction to Special Features,” and “The Ashley Encounters” segments. The “Alternate Ending” didn’t work as well for me as the actual one they used in the movie, and the Deleted Scenes didn’t add much, but were probably fun to film for Tim Meadows, who played the Sheriff.

The Gag Reel was fun, and shows that all the kids and adults had a good time filming. I really liked the “Behind the Zirkonians” short, which was done as a motion comic book. The animators must have had a good time pulling it together. And in “Meet the Zirkonians” you have an interactive feature that tells you various things about each of the four alien characters. For example, who knew Tazer was “single and looking”?

But the “Kung Fu Grandma” faux-commercial was my favorite feature. I had no idea that mind controlled grannies had so many special moves.

All in all, Aliens in the Attic was a fun movie to share with my kids. Find it at a rental store near you!

p.s. Pick up Aliens in the Attic at Amazon below!