In the stop-motion style of the great Rankin/Bass from the 1960s and 70s, A Miser Brothers’ Christmas has come on the scene just in time for the holidays. From Warner Brothers Animation and Cuppa Coffee Studios, this story picks up after the events of the 1974 classic The Year Without a Santa Claus… The Miser Brothers, Heat Miser and Snow Miser, are still fighting after all these years. But this time they’re joined by the rest of Mother Natures’ family to tell a brand new musical tale. 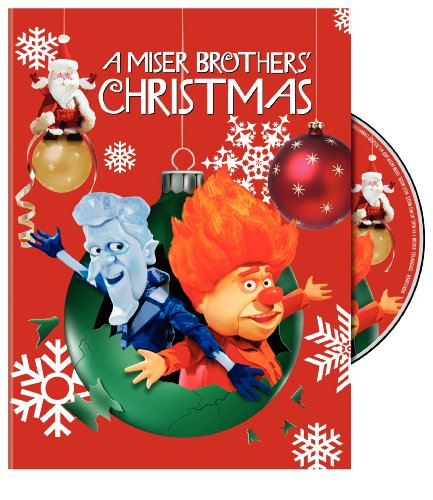 Rankin/Bass were responsible for many of the great holiday specials that still air between Thanksgiving and Christmas each year. First there was Rudolph the Red-Nosed Reindeer, then others such as Frosty the Snowman, Santa Claus is Comin’ To Town, The Year Without a Santa Claus, and many others. Like the Peanuts holiday specials from Charles M. Schultz that remind us the holidays are near, it’s hard to imagine a Christmas without hearing songs like “Silver and Gold” and “A Holly Jolly Christmas” sung by Burl Ives during these animated gems.

To say I was surprised anyone was thinking of continuing the Rankin/Bass series would be an understatement when I heard about this new special. In my mind, nothing could really compete with the originals, though I was interested to see if these animators did more than just ride the coattails of what had come before.

We were delighted to see the creators of A Miser Brothers’ Christmas did their very best to do justice to the Rankin/Bass tradition. And as I watched with my two daughters, I could see this was going to be another big hit at our house for Christmases to come.

In the beginning of the show, Heat Miser and Snow Miser head off to a family reunion with Mother Nature and the rest of her children around the world – including the Tides, Lightning and Thunder, Earthquake, and the North Wind. The North Wind, a bit of a “Mama’s Boy,” asked Mother Nature what might happen if Santa couldn’t deliver toys. And she offhandedly tells him that he could take control in that case… And that’s where things get interesting.

Meanwhile, Santa Claus is testing a new super sleigh created by his chief mechanic, Tinsel. The North Wind sends his minions to sabotage the sleigh and Santa crashes near the Miser Brothers’ mountains and hurts his back. The Misers think it’s their fault that he crashed, and so does their mother. So they’re assigned the task of helping out at the North Pole while Santa gets back on his feet. And all this time, the North Wind works his fiendish schemes to take control of Christmas himself.

Though some of the songs are a bit over the top for me, my daughters were singing right along with them about half the time. These are meant to be larger than life characters teaching a lesson about greed, getting along and doing the right thing. I think the animators succeeded in doing so in their 44 minute special.

Also included on the DVD is the feature “What Makes Stop Motion Go?” which focuses on the many aspects of pulling this film together. It took nine and a half months to create it and many different teams to get things right, from the animators and set designers, to the costumers and voice actors, and even the digital magicians who helped pull things together with a few CGI effects here and there. We were all entranced as the various people involved explained what they did. You could tell each of them wanted things to be just perfect.

Evidently this special aired in December 2008 during ABC Family‘s “The 25 Days of Christmas” programming. Somehow we missed it last year when it was on but were delighted to see it on DVD this holiday season. If you’re looking for another great holiday special to share with your kids, this is a good one to add to your holiday arsenal!

p.s. Pick up this and other great holiday specials below!