On December 21, 2012, the Mayan calendar ends, according to anthropologists and archaeologists. A new cycle will begin at that point. And, whether you’re a skeptic or believer, scientist or historian, there are some interesting facts in the new documentary – 2012: Science or Superstition. 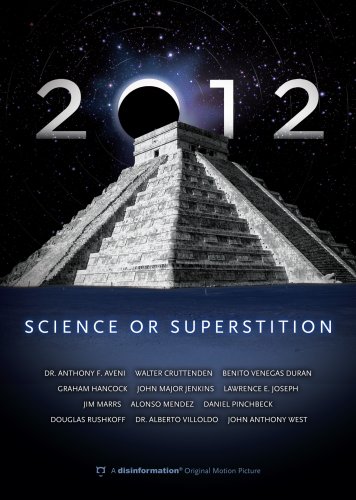 Several authors and scientists discuss the many aspects of the end of the Mayan calendar. Astronomers discuss the rise in frequency of sunspot activity. Anthropologists discuss the techniques the ancients used to predict star patterns across lifetimes and how they traveled various planes of consciousness. And the viewer is exposed to multiple points of view, facts, and conjecture.

Ultimately it’s up to the viewer to decide what they believe. I find myself squarely in the skeptics camp for this one.

It’s interesting to go to the bookstore and see all the titles published around the topic of 2012. Doing a quick search of the term “2012” on Amazon brought up 50 different books and DVDs from a variety of authors and sources, including a Complete Idiot’s Guide to 2012 published in October 2008.

Hollywood has jumped on the bandwagon as well. There’s an upcoming movie based on Whitley Strieber’s latest novel – 2012: The War for Souls is rumored to be in the works with Michael Bay involved as producer or director. And Roland Emmerich has a movie called 2012 slated to come out in November 2009 starring John Cusack as a researcher trying to counteract the events foretold by the end of the Mayan calendar.

Disinformation, the company producing the documentary, attempted to highlight multiple views of the subject matter and interview experts from a variety of disciplines – often conflicting ones – to provide as balanced a view as possible about what 2012 means. The documentary discusses a number of possibilities for what may occur, but doesn’t come out and say that they will happen. The fact that the producers came at the topic from a multitude of viewpoints and scientific pursuits is very helpful to the viewer who becomes hooked by the idea. The documentary provides a jumping off place for viewers to do their own research and come up with their own conclusions.

Some of the people interviewed for the documentary have very interesting backgrounds as well.

Dr. Anthony F. Aveni is a professor of astronomy and anthropology at Colgate University. He helped create the field of archaeoastronomy, and is one of the founders of Mesoamerican Archaeoastronomy. In particular, his research focuses on the astronomical history of the Maya Indians.

Robert Bauval is the author of a number of books discussing the relationship of the stars and ancient cultures, especially in ancient Egypt. His first book, The Orion Mystery, proposed that the layout of the three Giza Pyramids was intended to mirror the layout of three stars in Orion’s Belt. Other books by Bauval include The Message of the Sphinx, Secret Chamber, and The Egypt Code.

Walter Cruttenden is the Director of the Binary Research Institute and proposed an alternate view of history where the sun is one of two stars affecting the orbit of our solar system. This binary orbit theory may in fact be the reason for the repeating cycles of Golden and Dark Ages in mankind’s long history.

Many others were interviewed, including:

I found 2012: Science or Superstition to be interesting and engaging, but I’m still a skeptic. In 2012, I’ll be 42 years old — as Douglas Adams said, 42 is the ultimate answer to the ultimate question of life, the universe, and everything. Perhaps the Mayans knew something we don’t? Perhaps we’ll find out on December 21, 2012.
If you’re interested in the Mayan calendar and the phenomenon of 2012, I’d recommend you take a look at 2012: Science or Superstition. It’s good to get information from a number of sources before Hollywood gets a hold of it!
Check out 2012DVD.com for additional information about the documentary and a trailer.