As I continue to watch and review movies, I’m continually amazed at the amount of skill, persistence, and imagination that goes into them well before any scene is put on film. And with Watchmen coming to theaters on March 6, 2009 and the style of the original material as a graphic novel, I knew the process involved with taking it from paper to screen was going to be a journey of inspired imagination and hard work. The book Watchmen: The Art of the Film only reinforces that the artists and creative people involved were at the top of their game. 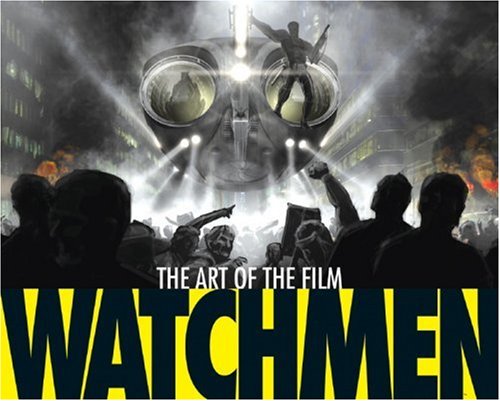 With any Watchmen-related article, you have to start with the original material. In 1986, the 12-issue series of Watchmen comic books was created by writer Alan Moore, artist Dave Gibbons, and colorist John Higgins. DC Comics published the series as individual issues during 1986 and 1987. When it completed its run, the issues were collected into a graphic novel that has inspired many an aspiring writer or comic book artist to new heights over the last 20+ years.

The Watchmen story is set in an alternate world where superheroes exist in a modified 1980s timeframe. The introduction of superheroes changed many things in that timeline, including the outcome of the Vietnam War and the presidency of Richard Nixon. Only one of the superheroes of the time had any real super-powers (Doctor Manhattan), and the rest were costumed crime fighters who relied on courage, strength, brains, and the tools they could create to get the job done.

Zack Snyder, who also took the graphic novel 300 to the big screen in spectacular fashion in 2007, tackled Alan Moore’s sprawling epic that has been mentioned over and over again as unfilmable. Snyder took it as a challenge and we will see the results on March 6th.

The book Watchmen: The Art of the Film includes scores of designs, photos, sketches, props, storyboards, and conceptual art from all phases of pre-production and production. This book has it all.

Though there is limited text in places written by Peter Aperlo, the book is mostly a collection of photos of various stages of development of different costumes, props, sets, and so on. As such, you see things change from initial sketches to final product, which gives you a glimpse into the minds of these amazingly creative people working on an impossible task.

What fascinated me as I went through the book was the level of detail. When you look at a modern set piece, you can often see where corners were cut to keep costs down. So perhaps a wall is simply a painted hunk of plywood, or a window opens into a green screen that will be filled in during post-production CGI work. But the sets of Watchmen seem to be unbelievably detailed, including 1970s and 1980s inspired posters on walls and the dingy brick walls of a society collapsing on its heroes. It’s as though the world of the graphic novel truly came to life. They extrapolated the world between the panels into something that I hope will transport us there when we see the final product on the big screen.

The Introduction provides the context for what Snyder and his production staff were attempting. Artist Dave Gibbons helped with the production, which meant it was that much closer to the original graphic novel. The goal all along was to “be true to the novel”, which meant they tried to even use the same colors as the original for costumes, sets, and wherever they could. Snyder had an amazing team with a singular vision of what they wanted to do with the story.

The Concept Art chapter shows just how much work went into the film before a stitch of clothing or a hammer was ever used to create the real bits and pieces actors would use to become the world and parts of the world. From simple black and white sketches to full color designs, they tried to get the look right before moving on. The initial designs in some cases were far different than what they ended up with, but the process was as important as getting the final product I think. You also get to see some storyboards in black and white and see frames from the final production, which shows just how much thought and care went into things before they shot the film.

What I thought was extremely telling also were the flashbacks filmed for the movie. The World War II-style Bettie Page pinup pictures of Sally Jupiter and war posters painted by Normal Rockwell (sic) were beautiful. So much detail went into not only the story and sets, but the process to make WWII-era pictures LOOK like WWII-era pictures. The superheroes were made part of the historical landscape for the film, which not only takes an artistic approach, but an understanding of the past as well.

In the Sets chapter, we see the world of Watchmen taking shape. From the power of finding the Comedian’s inner sanctum and what Dr. Manhattan’s home looks like, to the raw, seedy nature of that world’s New York City streets. What might have been a world of hope during the 1940s degraded into a seething mass of humanity angry at their heroes. Absolutely enormous sets, down to individual details of a NYC newspaper stand in all their intricate glory.

The Props chapter gives you a glimpse at yet another level of detail in the Watchmen universe. Guns and weapons in the Night Owl’s arsenal, to the myriad products in Ozymandias’ various lines of health care and hunger relief. And the newspapers… So many different articles, pictures, headlines, all done with infinite care to make sure they’re historically appropriate to the age in which they came from. What really made me smile though were the comic books inside the world of the movie, written about the heroes in the movie – wheels within wheels.

In the Owlship chapter, we see amazing detail for the Nite Owl‘s main mode of transportation. This is Watchmen‘s answer to “all those amazing toys” from the Batman movies of yesterday and today. The floor plans for the Owlship alone are worth the price of the book. Cutaways, details of particular features inside and out, and pictures of the Owlship in action make this chapter a lot of fun.

The Costumes chapter provides various images and models for… you guessed it… costumes from the film. All of the characters are here — Dr. Manhattan, Rorschach, the Comedian, and all the rest — past and present included. And you can’t forget the villains! Captain Axis, Moloch the Mystic, Spaceman, the Knot-tops… But my favorite section is the images of Rorschach’s inkblot mask in its various forms. I can hardly wait to see it in action in the movie.

Lastly, the Posters chapter gives us images of many of the posters created for the film — both used and unused, with all the main characters. All of them would be worthy of appearing in any Watchmen fan’s collection.

Watchmen: The Art of the Film provides a deeper glimpse at the amazing amount of work that’s gone into the Watchmen movie. It would add geek cred to any Watchmen fan’s coffee table.

p.s. Pick up this book or other <em>Watchmen</em> books at your favorite bookseller or on Amazon: