In May 2009, Terminator Salvation began hitting theaters worldwide to continue the saga of the Terminator story begun back in 1984 by James Cameron. Set in the time after Judgement Day, when the self-aware computer system Skynet launched a devastating nuclear attack that was the beginning of humanity’s war with the Machines. 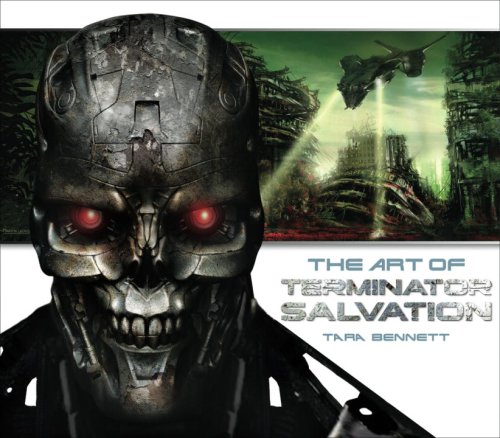 Terminator Salvation focuses on the intertwined paths of two very different men. John Connor (Christian Bale), a soldier in the Resistance, has not yet come into his own as the leader of the war. And Markus Wright (Sam Worthington), a prisoner condemned to death by injection, suddenly wakes up and finds himself in a world gone to hell. Both men are seeking to find their own way and both leave definite impressions on each other and those they encounter along the way.

Tara Bennett’s book, The Art of Terminator Salvation, provides a glimpse into some of the amazing art that led to the scenes eventually seen in the movie. Each image taken on its own is spectacular in its own right. But they’re even more impressive when you consider what it takes a movie crew to go from art to the finished product for a motion picture with a budget of $200 million.

Not only does the book provide glimpses into what the crew thought scenes might look like, but storyboards and context all the way from beginning to end. The artwork is simply stunning. And when you add technical drawings of some of the machines, like the Hunter-Killer, the Harvester, and the Moto-Terminators, you begin to see the engineering know-how that these talented people must have.

At the end of the book you get a glimpse of the production art for the Terminator Factory, and it is just incredible and scary at the same time. A factory run by fiercely intelligent machines creating an army of invincible robotic warriors. And to see some of the possible hardware the artists and designers imagined was unbelievable.

I was blown away by the artwork from beginning to end. I liked the movie, but books like this reinforce the sheer amount of talent necessary to make a movie of this size work. Whether you liked Terminator Salvation or didn’t, books like The Art of Terminator Salvation are inspirational and provide a platform for the many talented people to show off their work. And if nothing else, it’s one heck of an interesting centerpiece for a coffee table!

p.s. Click below to pick up these books from Amazon!