Tony Scott. The name itself evokes images of speed, danger, and action. From Top Gun and Days of Thunder to TV’s Numb3rs and The Taking of Pelham 1 2 3, his knack for taking explosive action and merging it with compelling drama has only improved over the years. Now merge the name Tony Scott with Denzel Washington and you have an even more powerful pair. Films like Man on Fire only reinforce the fact that when you have the trifecta of a great director, a great script, and a great actor, you end up with a great movie. And now, with 2010’s Unstoppable finally making its way to DVD and Blu-ray, Scott and Washington are continuing the trend. 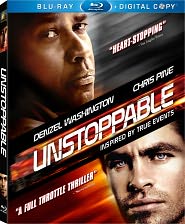 The story is simple for this one. Man vs. Machine. You have an out-of-control train running through populated areas and you have to stop it before it causes too much irreparable harm. How does it get out of control? Somebody forgets to set the brake and leaves the train unattended. Ok. That’s bad. And to add insult to injury, the train has cars containing caustic, explosive materials that could destroy entire towns along the way. That’s worse. Oh yeah, and certain folks are trying to do damage control in such a way that a disaster wouldn’t affect the train company’s bottom line. Now you’ve got me pissed off…

And honestly I think that’s the point. If you take the movie industry as a whole, it may seem like a giant machine trying to pump out money-making properties. But if you take each movie project separately, it’s a series of statements from the scriptwriter, the directors, and the producers about events they feel strongly about. Sure, Unstoppable on the surface is about a dumb mistake by someone who just wants to get to a stopping point for lunch, but it’s more than that.

I saw a brief review on G4’s Attack of the Show recently from Chris Gore (@ThatChrisGore on Twitter) who said this movie was a pass because it was based on a stupid mistake and stereotypes of the working class. I get that to a point. This movie touches on the clashes between unions and corporate types, old hands vs. new punks trying take their jobs, and may appear to trivialize it a bit because it doesn’t go into depth on any of it. Beneath all the action is a statement on taking a stand for what you believe to be right even if it kills you, regardless of all the political or ageist BS that might pop up.

That said, the core of the story is with three heroes trying to stop a stupid mistake from becoming much much worse. The rest of it is simply backstory and can’t be focused on in great detail because it’s the train itself (which Tony Scott calls “The Beast” in the special features) that should really get central billing. Frank (Denzel Washington, The Book of Eli), Will (Chris Pine, Star Trek), and Connie (Rosario Dawson, Seven Pounds, Percy Jackson & The Olympians: The Lightning Thief) work against the clock, conditions, and corporations to stop this train from harming innocents in Pennsylvania. And like most exciting action films, the heroes have to save the day, right?

Though the runaway train runs away in the first 15 minutes of the film, it took a while to get going for me. It wasn’t until Frank and Will picked up their train and discovered they were playing chicken with the runaway train that things really got going. That said, when things got going, they went a million miles an hour towards the conclusion. It was an entertaining movie with solid characters that you came to care about as things progressed. I can see why it may not have done as well as they would have liked at the box office (only $81 million domestically and another almost $86 million in foreign box office in 14 weeks according to Box Office Mojo with a reported $100 million budget)… But I suspect it will catch up with DVD and Blu-ray sales and rentals.

In addition to the film itself, the Blu-ray includes several great features. But by far my favorite was “The Fastest Track: Unleashing Unstoppable.” Clocking in at nearly 30 minutes, the feature covers everything from producer and scriptwriter input to interviews with the actors, bits on the stunt and practical effects work, and a ton on Tony Scott’s directing process. It was fascinating to watch him work, stogie and all, with the insane number of cameras he had going at all times to allow his actors more freedom on a particular shot. Add to that the incredible photography done by a herd of helicopters and racing cars with cameras strapped onto huge scaffolds and you have one heck of a production.

Also included were “Derailed: The Anatomy of a Scene” where they show all the work that went into derailing and blowing up a train for one pivotal scene. For a scene where only one take was possible, since they were destroying the faux train they had built for it, they used a ton of cameras and safety measures to make sure that the stunt drivers and crew were all as safe as possible. The explosion was just the tip of the iceberg!

Other features were “Hanging Off the Train: Stunt Work,” “On the Rails with the Director and Cast,” and “Tracking the Story: Unstoppable Script Development” – each focusing on different aspects of the film. In “On the Rails,” it was fun to see relative newcomer Chris Pine a bit star struck by working with Denzel Washington and Tony Scott on the same film.

The Blu-ray picture itself was excellent, with 1080p resolution and full Dolby Digital 5.1 surround sound. The differences between the speed of the trains and the landscape rushing by were incredible with colors that really popped the green of the trees and the red of the runaway train out at you without needing 3D to do it. The sound was rich and vibrant as well from the bass of the thumping helicopter blades to the voices of the actors and the screaming wheels of the train.

If you’re a fan of Tony Scott’s work, want to see more of Denzel’s or Rosario’s work, or want to see Chris Pine somewhere other than on the bridge of the Starship Enterprise, I’d definitely encourage you to give Unstoppable a chance. It was fun, frantic, and entertaining!

p.s. Pick up Unstoppable on Blu-ray or DVD from Barnes & Noble below! 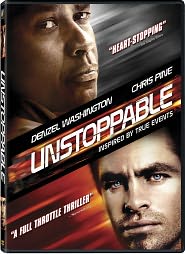