Genre mash-ups. They seem to be very popular these days. In the next couple of weeks, we get to see if Cowboys & Aliens works for moviegoers, putting together a western with a science-fiction story. Earlier in the year we saw Sucker Punch from director Zach Snyder, and I have to say it didn’t fully work for me, throwing together samurai, steampunk, mobsters, and dragons. On the surface, it was a beautiful film, but it fell apart for me once I started thinking it over. 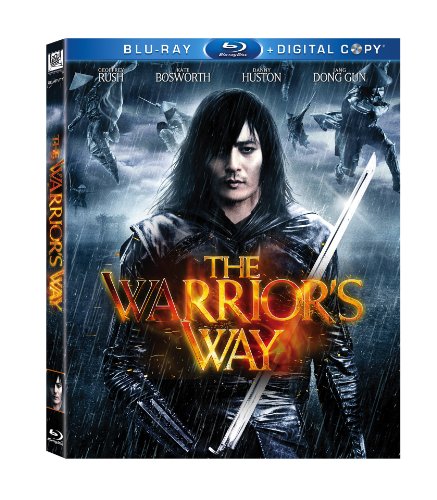 So what do these movies have to do with The Warrior’s Way? Well, it’s another mash-up that doesn’t quite work, merging a western with a kung-fu movie. It almost works in spots, where it takes a breath and isn’t working so hard to sell itself to the audience… but not enough to keep people in the seats. According to Box Office Mojo, the film cost $42 million to make, but it only made $11 million on screens worldwide. Unfortunately, I don’t think it’s going to work all that well on DVD or Blu-ray to recoup costs either.

Let’s start with the story. If you’re trying to avoid spoilers, you might want to skip the next few paragraphs.

Yang (Dong-gun Yang) has been working on behalf of his clan to destroy all members of a rival clan of warriors. He kills all but one – a baby girl – and can’t bring himself to kill her. This puts him at odds with his own clan, so he flees to the United States to find a friend of his living in the frontier town of Lode. When he gets there, he finds his friend is dead and the town is paralyzed after a brutal attack by the Colonel (Danny Huston) and his men. In Lode, he meets Eight-Ball (Tony Cox), a small person performer in the carnival that is trying to revive the town; Lynne (Kate Bosworth), a fiery knife-thrower with little skill; and Ron (Geoffrey Rush), a drunk handy-man working to build the ferris wheel.

Lynne has sworn vengeance against the Colonel, who killed her family and assaulted her. She left her mark on him however, splashing his face with a frying pan full of hot oil. Huston isn’t the most attractive actor to start with, but when you partially melt his face he’s downright disturbing. Yang teaches her how to throw knives and fight with swords, but refuses to draw his own special sword that killed all those people when the film started.

You can see where this is going, right? The Colonel comes back to take his revenge, the people rise up, Yang eventually draws his weapon to save the day, and everybody lives happily ever after. Well, not exactly. As soon as Yang draws his sword, his own clan, seeking the baby he didn’t kill, comes to find him. When he won’t kill the baby, they begin attacking the town and Yang and the rest have to fight for their lives.

So though the story itself is a bit predictable, it might have worked for me except for a couple of things. First, Bosworth’s performance as Lynne for the first half of the film is so over the top that it’s impossible to identify with her character in any way. You want to, of course. But her loud, boisterous, brash caricature of a Western woman just knocks over any kind of connection you might get with her character. About halfway through the film she settles down, but though I like Bosworth, this was not her finest moment.

Yang on the other hand was perfect in his role. He reminded me of Kung Fu, the television series from the 1970s starring David Carradine as a Shaolin priest wandering the west. There is a similar peace to Yang’s actions and his facial expressions and calm manner helped show the character’s development as he grew attached to the baby, Lynne, and the rest of the townspeople.

It’s the quiet moments that stick with me after watching, with Yang tending to a small flower garden in town and working in the laundry. But when it tries to get larger than life, it can’t get it together.

Though the film tries very hard to take itself seriously, the merger of wire work and Spaghetti Western just never clicks, so it becomes more humorous than anything else. Director Sngmoo Lee tried to wrangle this mess into something entertaining and almost succeeded in spite of himself. But the whimsy overwhelms the seriousness of some of the Colonel’s (and Yang’s) actions, making it very difficult to stay in the moment for long.

The Blu-ray offers a brilliant 1080p picture, with vibrant colors throughout, and DTS-HD 5.1 audio that captures everything from battle sounds to the whisper of sand in the Western desert beautifully. The use of color in the film is definitely on the garish side at times, emphasizing sunsets and sunrises, as well as the black of night with sparkling stars above.

Beyond the film itself, the first disc also includes a few deleted scenes and a short Behind-the-Scenes featurette that shows the cast having a good time doing stunts on set. None of the deleted scenes really would have added anything to the picture, and I really would have liked to have seen more about how the film was put together. Perhaps a short feature deconstructing one of the battle scenes at the beginning, or more lengthy interviews with the cast and crew would have helped. The second disc offers a digital copy of the film for use on laptops and other portable media players.

I really wanted to like The Warrior’s Way after seeing the trailers last year, but ultimately it doesn’t include enough to warrant a recommendation. If you really want to see it, I recommend you rent it at Red Box for $1 and save your money for better films.