1964. Eleven years after director Byron Haskin directed The War of the Worlds he was back at work directing another science fiction classic – Robinson Crusoe on Mars. These two movies paved the way for many Saturday afternoon movie viewings as a kid on our old black and white television. I didn’t know about Technicolor until I saw color televisions at my friends’ houses before we finally got one in 1982. 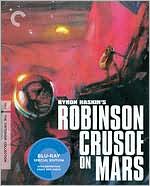 But beyond my small corner of the world, Robinson Crusoe on Mars for me captures the beauty of science merged with science fiction. We didn’t know much about the mysterious red planet at the time. Mariner 3 and 4 were launched in November 1964 and Mariner 4 sent back pictures nearly eight months later. The Soviets had beaten us there in 1962 with the Mars 1 probe, but we were all in the dark and learning everything we could at that time. When the Viking probes were launched in 1975, the goal was to put a lander on the surface and send back detailed information – pictures from the orbiter left above the planet and the landers themselves sent back an amazing amount of data and images that fueled a Martian fever here on Earth.

That fever of course wasn’t new, with theories going back to the 17th and 18th century proposing that life existed along the “canals.” Writers from H.G. Wells to Edgar Rice Burroughs proposed grand civilizations wanting to cause trouble for us mere Earthlings. So by 1964, we knew little about what was actually there but had some experience with space flight and how to keep humans (and animals) alive in space for a time. Yuri Gagarin had orbited the globe in 1961 for the Soviets and John Glenn did the same in 1962 for the United States. Our budding space program was gearing up after John F Kennedy’s famous speech in 1961 announcing the goal to get an American safely to the Moon before the end of the decade. We arrived in 1969 with the Apollo 11 mission.

So for writers John C. Higgins and Ib Melchior to take Daniel Defoe’s novel Robinson Crusoe and set out to strand a man on Mars, they didn’t go halfway. They researched. We knew there was minimal atmosphere on Mars from early probe results. We thought there might be water on Mars somewhere, courtesy of the polar ice caps. And if there’s air and water, there might be life…

From that point on, it’s based on pure speculation but much of what you see seems based in what we knew at the time of space flight and the dangers of interplanetary flight. From the point that Commander Chris Draper (Paul Mantee before The F.B.I. and Mission: Impossible) and Colonel Dan McReady (Adam West pre-Batman) entered orbit around the red planet, things start to go wrong. First, they run out of fuel trying to keep the ship from hitting a meteor and then they launch their landers (which look similar to the Mercury capsule used for splashdown) and hope for the best… Draper survives his landing and finds shelter in a nearby cave.

If you don’t like spoilers, I’d skip the next three paragraphs…

Over the next couple of months, he discovers that McReady didn’t survive his landing, but the monkey they had on board – Mona – did survive and becomes Draper’s companion. With dwindling supplies, the two set out to find ways to survive. Eventually he does find water, figures out how to release the oxygen from a strange coal-like rock, and even find a strange plant life that sustains the pair with odd red “sausages” that grow in the water.

After he figures out how to survive, he and Mona begin exploring the planet and eventually coming across a small burial of a human-looking skeleton. Soon after, he sees an alien ship land on the horizon and goes to investigate. A group of men in space suits is supervising a group of nearly naked slaves working in the rocks. When one escapes, Draper helps him and the two seek shelter in the cave he’s called home for several months.

Though initially reticent, the man who comes to be known as “Friday” (Victor Lundin) becomes much more friendly and decides to help Draper and Mona survive. When the “bad guys” come back, they hunt the trio down and destroy Draper’s home cave. They escape and find their way to one of the polar ice caps and eventually get rescued by a spacecraft sent from Earth to see what happened to Draper & McReady.

Ok, that’s the end of the spoilers…

What I love about this movie is that it’s consistent within itself. And when I say that, I mean that everything is thought out – from what Draper uses from the wreckage to how he finds ways to survive and stay alive. There was a great deal of thought that went into the script, sets, and special effects to make this a great film for the time.

As for the Blu-ray transition courtesy of Criterion, they did a simply astounding job cleaning up the original film. According to the little booklet that accompanies the disc, “Thousands of instances of dirt, debris, scratches, splices, warps, jitter, and flicker were manually removed using MTI’s DRS system and Pixel Farm’s PFClean system, while Digital Vision’s DVNR system was used for small dirt, grain, and noise reduction.” The resulting picture is in gorgeous 1080p transfer to Blu-ray. The Technicolor colors were crisp and the picture was free of any imperfections that I could see while watching.

For the soundtrack, it was also amazingly clear of audible defects. It was remastered to 24-bit quality from a 35 mm magnetic three-track master according to the booklet – “Clicks, thumps, hiss, and hum were manually removed using Pro Tools HD. Crackle was attenuated using AudioCube’s integrated audio workstation.” The highs were high and the bass was suitably low, but more importantly to me – all of the dialogue was clear as a bell.

As the first Criterion Collection Blu-ray I’ve had the pleasure of reviewing, I have to say I am suitably impressed. They did a terrific job cleaning up nearly 47 year old film and tape for a beautiful presentation.

In addition to the film itself, there are numerous extras and special features as well. Screenwriter Melchior, special effects designer Al Nozaki, and actors Mantee and Lundin offer a detailed commentary track that also splices in excerpts from an older interview with director Haskin. There’s the “Destination Mars” feature about the science of the time the film was based on. There’s a gallery of images from the film production, including early sketches of the various pieces of technology Draper develops and uses throughout the picture. And the original trailer is also included.

Honestly, since I haven’t seen this film in 30+ years after seeing it on an old black and white TV, I really enjoyed Robinson Crusoe on Mars. Is it outdated? Yes. But it was treated as a serious science fiction film and not as simply another “monster of the week” feature as so many of the science fiction films of the era turned into. If you like classic science fiction, I would heartily recommend that you check out this Blu-ray. It’s worthy of any serious sci-fi movie collection.

p.s. Pick this one up at your favorite store or at Barnes & Noble below: 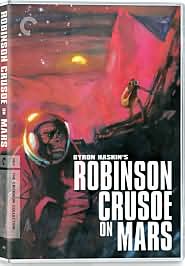