Fast forward to the horrible remake of Planet of the Apes starring Mark Wahlberg and Helena Bonham Carter. As I watched the film, I felt my inner kid screaming in agony while my adult self cataloged all the bad things in the film and promptly shredded those memories so no trace would remain behind… 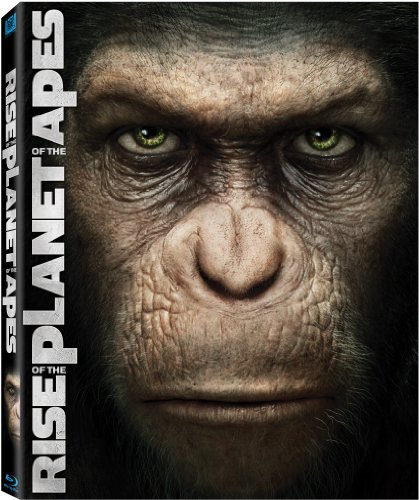 So when I heard about Rise of the Planet of the Apes, it was my inner kid who screamed “nooooooo!” and convinced me not to try again. I decided I simply didn’t need modern movie producers treading again on fun memories of my youth. But then I started hearing all the good reviews of the film, including one from my mother who doesn’t usually like science fiction movies. And I vowed to watch the film when it was released on DVD and Blu-ray.

Over the holidays, I had a chance to watch the Blu-ray and found myself enjoying Rise of the Planet of the Apes, with James Franco as researcher Will Rodman trying to cure Alzheimer’s so his father, music teacher and pianist Charles Rodman (John Lithgow) could live a full life again. The true star of the film however was Andy Serkis, who pioneered motion capture acting as Gollum in the Lord of the Rings movies with Peter Jackson, and has turned “mocap” acting into an art form. How can a grown man connect emotionally with a movie audience when it’s not even him we’re seeing on screen? Somehow he manages to pull it off beautifully and tug on our hearts the whole way through as Caesar, the first primate who evolves a higher intelligence in the film.

Cast-wise I have to say I’m not a huge Franco fan. Though I’ve not seen 127 Hours, which I hear is very good, he seemed very wooden through the majority of his performance in Rise as he has in most other films I’ve seen him in. Lithgow was amazing as the Alzheimer’s suffering father who bonds with chimpanzee Caesar after his son the researcher brings him home to keep him from being destroyed after a lab accident. Freida Pinto was fine as Caroline Aranha, zoo veterinarian and Franco love interest. Brian Cox was great as the uncaring owner of an ape sanctuary. Tom Felton (Draco Malfoy from the Harry Potter films) plays a cruel animal keeper at the sanctuary with ease. And it was fun to see Tyler Labine (Tucker and Dale vs. Evil) in a more serious role as the ape wrangler at the research facility as well as David Hewlett (Dr. Rodney McKay from Stargate: Atlantis) in a role as Franco’s neighbor trying to protect his family and property from Caesar living next door.

But really it was Serkis who stole the show. I knew he was a great actor after the Lord of the Rings and we saw more of his mocap work in Jackson’s King Kong, but it was really amazing how far the technology has come that can not only capture his facial expressions and body movements, but emotions as well. James Cameron’s Avatar was the most recent exploration of fully embracing mocap, but Rise of the Planet of the Apes shows it can be used to have real actors act as realistic animals as well as humanoid aliens. Not once was I even thinking “man in suit” while watching Caesar go from baby chimp to conquering ape hero. I’ll be really shocked if Serkis doesn’t get an Oscar for his performance this year.

Though the story was a bit like Titanic, where you knew the apes were going to take over the world, I was astonished at how well the film worked from beginning to end. It offers a compelling storyline combined with great acting to transport the viewer to a scary possible future. I’m excited to see where director Rupert Wyatt and screenwriters Rick Jaffa and Amanda Silver choose to go with the sequel, since they have more than 1000 years of ape-dominated future history to explore!

The Blu-ray box includes the Blu-ray on one disc as well as a DVD plus a digital copy. The film looks gorgeous on the Blu-ray, with a full 1080p/AVC transfer in the widescreen 2:35:1 aspect ratio. While researching this review, I was shocked to find out that the film itself was recorded on 35mm film stock, which makes such a crisp transfer to 1080p HD screens that much more impressive.

The soundtrack is equally crisp, recorded in DTS-HD Master Audio 5.1. With our 5.1 system at home, we enjoyed listening to the birds chirping in the background behind us while Caesar was exploring the Redwood forest in some scenes. We never had to adjust the audio to better hear dialogue or turn down the sound during some of the big action scenes when things exploded or crashed.

As far as the extras go, there are a ton on the Blu-ray – from the two audio commentaries (one by director Wyatt and the other with writers Jaffa and Silver) to the deleted scenes, several great features about background on the film and Serkis’ brilliant performance, and sneak peeks. All of the video features were done in 1080p except for the BD-Live extras which I wasn’t able to see on my at-home Blu-ray player. The “Mythology of the Apes” goes into detail about the filmmakers and actors’ respect for the source material. “A New Generation of Apes” provides a behind-the-scenes view of how they transformed Andy Serkis and the other motion-capture actors into actual characters on screen. It involved a great deal of training for the actors as well as some powerful computer-aided tools on the post-production end which has me excited to see what sorts of films might come out in the next few years.

Honestly I was surprised at how well Rise of the Planet of the Apes worked after the debacle of the 2001 remake. And I’m cautiously optimistic about a sequel in the next few years to continue Caesar’s story of world domination. If nothing else, I think the film suggests that we be kinder to our future ape overlords!