So when I saw that there was a movie simply called Monsters and saw that it was getting great reviews from places like Ain’t It Cool News, I figured I had to add it to my watch list. Recently I had an opportunity to purchase a copy of the film on Blu-ray, so I did. What I found had the potential to be great, but turned out to be mediocre. 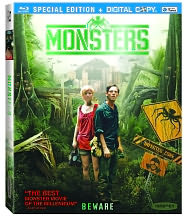 The plot revolves around a NASA probe that found evidence of alien life and crashed upon reentry back on Earth. Landing somewhere in the heart of Mexico, whatever the probe brought back starts to infect an entire area as giant aliens start popping up to destroy things. As with the illegal alien issue along the US/Mexico border right now, the US and other countries in the southern part of North America begin to build walls to keep the critters out and send their militaries in to destroy the ones that get through.

So far so good. It’s your basic monster movie plot. Aliens land and try to take over. I didn’t even mind meeting Andrew Kaulder (Scoot McNairy) and Samantha Wynden (Whitney Able). Kaulder is a photographer for some big news outlet owned by Samantha’s father. When the boss calls to tell him to make sure his daughter gets back to the United States before the borders close, Kaulder isn’t pleased but does the job anyway. Unfortunately, things keep going wrong and they end up traveling through the infected zone to get home. Will the monsters eat them or let them through?

Well… Here’s my problem. There are monsters. And they crop up now and then. But there aren’t enough of them. And when they do show up in force they either want to destroy buildings and vehicles or they want to make love. For the majority of the middle of the film, it’s about the couple trying to find a way to get back to the States. They go through one crisis after another and do eventually find their way home, but for what?

The big payoff for this film was seeing two towering aliens making rainbow love to each other over a deserted gas station. Yippee. I wanted more monsters, less traveling Heart of Darkness style to get to the ultimate conclusion that the aliens just want to be left alone. I wish somebody had told me to leave this movie alone. It was 94 minutes I’m not getting back.

Maybe it’s that I was hopped up on cold medicine while I was watching it, but I probably would have walked out had I seen it in the theater. Or perhaps slept through it. As it was, I finished the movie and didn’t really feel like watching the extras. I just went to bed.

If you have 90 minutes to spare for a road trip movie without much action or drama (except for a few brief battles between aliens and people), I’d recommend you Redbox this or watch it On Demand, but don’t spend much money on it.