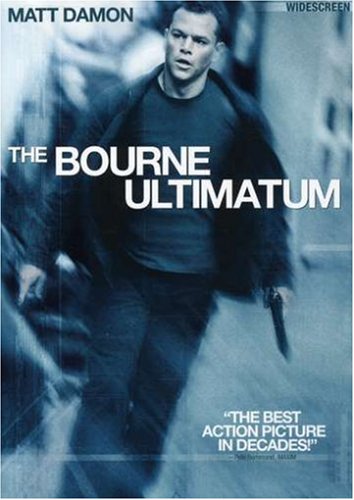 Yes, I’ve been slacking… In the last couple of months, I’ve seen the following movies…

If you liked the other Bourne movies (Bourne Identity or Bourne Supremacy) or the latest Bond flick (Casino Royale), you will most likely enjoy this action-packed movie. It serves as a bookend to the trilogy begun by the Bourne Identity a few years ago. It’s definitely a thrill-ride, and once it starts, it doesn’t let up until the end.

It picks up where Supremacy left off, with Bourne finding out more about his past. He trots around the globe and ends up coming back to the US to finish things off… I won’t spoil it for you.

What did I like? The action was top-notch as it has been in all of the Bourne films. And this closed the chapter on the Bourne saga without slamming the door shut on future additions to the series.

What didn’t I like? Though Paul Greengrass is an amazing director, he really needs to stop with the “Shaky Cam” — there were long sequences in Ultimatum where it’s nearly impossible to keep focused on any one thing on screen because the camera is bouncing around so much. I understand that it’s useful to get the viewer engaged in the movie – it makes you feel like you’re in the middle of the action. But I thought it was over-used in this one.

I’ll give it a solid 3 out of 4 stars. I didn’t like it as well as I liked the Bourne Supremacy, but it does an admirable job of closing out the series.

Ever since I saw the first full trailer for the Simpsons Movie, I knew I had to go see it. I’ve been singing “Spider-pig, Spider-pig, does whatever a Spider-pig does…” since I saw that trailer and the movie only reinforced it. Even my two girls are singing the Spider-pig song with me now. Yes, we’re warped!

I loved this movie. It’s basically the length of three regular Simpsons episodes stuck together (about 90 minutes) and it never bogged down for me. There were some tender moments as well as some laugh-out-loud moments.

If you like the Simpsons on the small screen, you’ll like this movie. If you don’t, well, I’d avoid it. 🙂

Ok, I have to admit I really didn’t want to go see this film. It was my wife’s choice for her birthday. And, reluctantly, I have to say I liked it. Was it great? It wasn’t a Moulin Rouge or even a Chicago. Was it fun? You bet… Seeing John Travolta in drag in a body suit is something to behold. The music was fun, the cast was fun, and generally I only felt it bogged down a few times.

That’s it for now…

What have you guys seen? Anything good? I really want to see Stardust, but haven’t had a chance yet. The book by Neil Gaiman is a fun read – a modern fairy tale sort of similar to The Princess Bride in some ways, but very different in others. It’s a Neil Gaiman book, which always tends to defy classification.