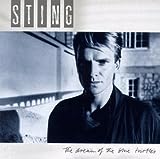 Yes, this is an odd article for me. It struck while I was mowing the lawn in 90 degree heat. Blame it on the baking of my brain while listening to Sting’s album “Dream of the Blue Turtles”.

I’ll state right up front that this is an opinion piece. It’s not related to the entertainment industry other than the fact that it was songs from Sting’s album “Dream of the Blue Turtles” which spurned me to write the article. So if you’re opposed to liberal thinking, stop reading now.

It came to me that there are at least three lessons to be learned from this amazing album of his.

Though I consider myself conservative, I know I have some liberal streaks in me. And this album plays those streaks like guitar strings.

But if you consider the messages… If you love someone, set them free. This is a tough lesson to learn when you’re growing up. People are not possessions. You can’t shove the ones you love into cages and keep them for when you need them. People sometimes grow apart. And if you truly love them, let them go. Sometimes they come back (not in a Pet Cemetery kind of way), and the journeys you’ve both taken is worth the risk.

Regardless of ideology, we all share the same biology. Yes, we’re at war with terrorists. But it’s very easy to fall into the trap that all of those who follow the teachings of Islam are terrorists. We can’t just kill all Islamic people. That would be insane. We may not share the same ideology, but they’re people. And rational Islamic people exist. All we can do is hope that eventually the rational people are able to take control. In the United States and elsewhere in the world.

And lastly… No such thing as a winnable war. We won the war in Iraq. Twice. What did we achieve? Stability? Nope. Improved living conditions for the Iraqi people? Nope. Self-governance? Not yet. And still we argue here over what’s the best course of action. We have done what we went in to do. Saddam is out of power. The Iraqis have established a representative government. And still they don’t have the ability to police their own country. It’s a big place. There are a lot of people who want chaos to succeed in the place of rational thinking. But haven’t we paid the price enough already?

McCain doesn’t have a good handle on economic policy IMHO. He also seems to want to do in Iraq what we’ve done in South Korea, Okinawa, and Germany… keep US forces there in perpetuity. Ugh.

Obama has a better handle on economic policy. He wants to bring our troops home responsibly. It’s time to focus on healing the wounds of 9/11 and the looming economic crisis. Let’s focus on finding new ways to combat the energy crisis. Let’s hope for the best — plan for the worst, but keep that hope alive.

It’s time for us to simplify things for our representatives in Congress and the White House. Send the message it’s time to take care of things at home. Then we can refocus our efforts on other worldwide issues such as AIDS, malaria, starvation, and all the things we choose not to focus on. Yes, we entertain ourselves to get away from the world — but maybe it’s time to focus on the problems at hand and pay less attention to what Lindsay Lohan has done or whether Brittney has forgotten to wear underwear this week.

Let’s do what’s right for the people of the United States for a change.

I’m done ranting for now. Listen to the message and apply it to our everyday lives. We have a lot of work to do. Let’s get started.