I love being a parent. It gives me excuses to check out cool educational software for my daughters. Itzabitza offers a combination of art, reading, creativity, and exploration as well as a reason for kids to get used to using a mouse! In addition, it’s fun for parents to play along with their kids – unlike far too many games I’ve played with them recently. 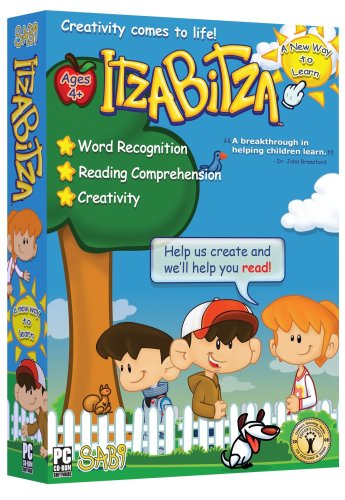 The general theme behind Itzabitza seems to be selecting a setting and drawing things with the mouse to interact with the setting on screen to collect stars. As you collect more stars, you unlock new settings and can do new things. The five settings or playsets are “Home Sweet Home,” “Let’s Go Camping,” “Play in Space,” “A Farm Life,” and “A VERY Scary Haunted House” (just in time for Halloween).

If you’re familiar with Scribblenauts for the Nintendo DS, you sort of have the idea. But this is aimed squarely at younger kids, probably in the 4-6 year old range (though my 8 year old liked it too). Instead of having to write words to create things on the screen, you’re given a set of words that you click to get little tasks – like draw a house, a window, a rock, and so on. So you draw a house. And even if the house isn’t great, it figures out that’s what you drew and it animates it.

Honestly for me it was the little animations that made the game work. I’m definitely not an artist by any stretch of the imagination, but my two daughters worked together to figure out each cool little thing to do at their own pace. Add to that the fact that no two sessions will ever be exactly the same and you have a definite winner.

One day after playing the game, my eldest daughter told the story of how she and her little sister (age 4) had to try and get milk from a cow. They kept clicking on it and all it did was poop, but they eventually got the milk and giggled like mad for the better part of 10 minutes. It’s little unexpected things like that which will endear this game to most kids immediately. I think the folks at Sabi Games have an amazing understanding of what makes kids tick and how to keep them entertained while simultaneously teaching them about cause and effect, reading, and how to use their creativity. It’s a great combination.

In case you think I’m gushing about this game, I’m not the only one. ItzaBitza was just named to Dr. Toy’s Best 100 Children’s Products of 2009 list. It has also received glowing reviews from parenting and technology experts and recently won a Creative Child Game of the Year Award. The game had previously won a Parents’ Choice Gold Medal Award; an Editor’s Choice and Gold Award from The Children’s Technology Review; a five-star review from USA Today; The Toy Man Seal of Approval, eco-Recognition Seal, Award of Excellence and eChoice Award; an Editor’s Choice Game Award from the Computer Times; and a “Best Tech for Kids” mention in BusinessWeek.

Honestly, the only issue I had with the game while playing with my 4 year old was after you click on a word, you get a question. And you have to mouse over the words one at a time to have the computer read them. At a certain age, I think the word-by-word option should be there, but for younger kids to not get frustrated quickly it would be nice if it read the whole question instead of a word at a time. Perhaps that can be an option on the lower, easier levels, and the more backgrounds you unlock you have to read more.

If you’re a parent looking for a creative way to engage your youngsters ages 4 and up, Itzabitza is a great way to spend some time with them and let them explore their creative side while learning. It’s only available on Windows machines (XP and up), but you can find the boxed version at Amazon.com or purchase it on Steam (http://store.steampowered.com). Be sure to get your copy today!

p.s. Pick up these games today!