Let me start by saying that I don’t like writing negative reviews. Usually I try very hard to find at least a few nuggets within everything I review. So to say I was disappointed in Go Play City Sports is an understatement. 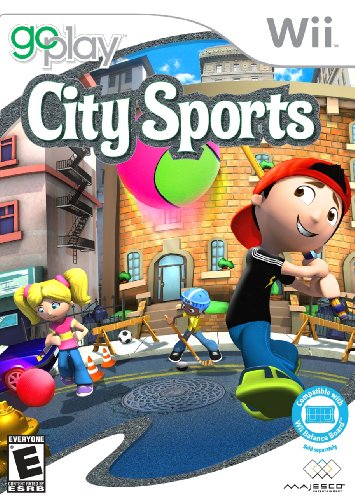 I should also say I’m not a huge console gamer. We’ve had a Wii now for almost a year and we love it, even though we haven’t picked up many games for it yet. Lately we’ve been playing Wii Sports Resort quite a bit and it’s a lot of fun. The controls are well thought out, the games are pretty straightforward to play, and it works with the built-in Mii avatars you create for other games.

So when I had a chance to check out Go Play City Sports, I was thinking it would work in a similar fashion to the other basic Wii games we have. None of the games appeared too far out of what Wii Sports or Wii Sports Resort had already done. Go Play City Sports includes stickball, kickball, street hockey, handball, jump rope, and shootout soccer.

But when I had a chance to fire up the game and play it, I was sorely disappointed by poorly-designed interfaces for creating avatars and actually playing the games themselves.

To get started playing the single player games, you have to create a new player profile. Creating the profile posed a challenge for me. Maybe I’m getting too old or something. Typing a name took forever and once I “accessorized” my avatar, I couldn’t figure out how to move on. I tried every combination of buttons I could think of before I hit the “+” button and finally saved it. Oh, and you’d better really like your avatar because you can’t go back and change it later.

Once you have an avatar, you can go to “My Street” where you can access the various games available. Wander around until you find a kid on the street, hit the “A” button to talk to them. If you want to play the game there, you can say yes or you can hit the “B” button to play another time and try the next kid.

All of the games (except for the soccer one) use both the nunchuk and Wii remote combined. (For soccer, you can also use the Wii Balance Board, though I didn’t try that.) You typically move using the nunchuk control stick and do other actions such as swinging the stick in stickball or pitching using the Wii remote.

Trying out “Handball” for the first time, it was obvious that I have no hand-eye coordination at all as I continually missed hitting the ball when it bounced off the wall. I’m sure it was simply a timing issue with knowing when to swat the ball out of the air, but I can truthfully say I never got it to work deliberately.

“Stickball” and “Kickball” use pretty similar controls. One player (or the computer-controlled opponent) will pitch while the other tries to hit or kick the ball. I found it much easier to play stickball and actually hit the ball than to kick the ball in kickball where I nearly always struck out. Once the ball is in the air, you can get your kids to run around the bases if you have any on base. And if you’re lucky you can score a double or a home run if the stars align in your favor.

The “Jump Rope” game hit me like what I’ve heard Guitar Hero is like, where you see a number of different button and arrow options at the bottom of the screen and have to hit the right one when it is highlighted to keep going. Again, it was pretty obvious I had no hand-eye coordination as I was almost always incorrect in what I was doing.

“Shootout Soccer” was interesting though I hope it would be easier with the Wii Balance Board. You had to lean one way or the other to hit the ball with your head, while missing all the objects flying at you that weren’t actual soccer balls. I’m sure my avatar had a headache with all the stuff smacking him in the forehead. I seemed to hit every non-ball object with uncanny accuracy.

And “Street Hockey” features a three-on-three game of hockey played on a building roof. Of all the games, I felt that this was the most violent, encouraging some serious body-checking not only on your opponents but against the hazard cone in the way of the goal. Again, I never got the hang of how the game would switch players depending on seemingly random criteria as you moved across the “rink”.

Of all the games to play, I found “Stickball” to be the most fun, as it was the easiest to pick up. Move the players in the field with the nunchuk. Hit or pitch the ball with the remote. And have the kids run like mad around the bases using the arrow buttons on the remote.

Maybe my expectations were too high for this game, but I was expecting it to be more like the Wii Sports Resort games which were very easy to pick up and start to figure out. Go Play City Sports seemed like it should have integrated more closely with the existing avatar-creation in the Wii system and focused on making the games more playable. It fell short on both counts for me.

If you’re looking for a new Wii game to try and find Go Play City Sports on sale, I might recommend you give it a try, but it was a bit of a bust for me.

Go Play City Sports is rated E (Everyone) by the ESRB for Comic Mischief.