Before you ask, yes I know it’s not quite Thanksgiving and I’m reviewing a Christmas-themed DVD. My family will be the first to tell you I’m a bit of a Grinch when it comes to the holidays. After working one holiday season in a mall with Christmas music playing 24/7, it pretty much burned away any love I had for decorations and forced holiday spirit. That said, I have a soft spot buried deep for the core thought around that time of year: ‘Tis better to give than receive. 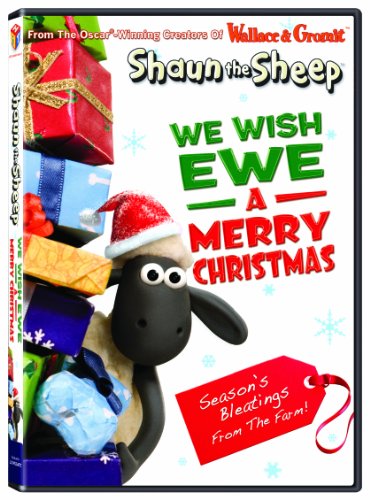 Sometimes a product will sneak through my defenses and tickle that small bit of holiday spirit I have left. When you take a set of characters I already know and love – Shaun the Sheep and the rest of the gang on the farm – and offer holiday-themed stories that are both entertaining and heart-warming, how can I resist? Shaun the Sheep: We Wish Ewe A Merry Christmas offers seven five-minute episodes from the Shaun the Sheep series by the creator of Wallace & Gromit. And every episode is a delight.

As I’ve mentioned before in other DVD reviews, this series takes stop-motion claymation techniques and uses numerous slapstick, silent film, and Vaudville techniques to present fun, heartfelt stories without the use of speech. It’s more akin to Charlie Chaplin, Buster Keaton, and the Keystone Kops than most modern animated shows (except maybe for the first half of Disney/Pixar’s WALL-E). Though the animals and human characters sometimes make noises, it’s the gestures, expressions, and actions that are used to tell the tale. And the animators at Aardman have this style of storytelling down to an art that continues to amaze me episode after episode.

Shaun the Sheep: We Wish Ewe A Merry Christmas is the first holiday-themed DVD from Lionsgate, HiT entertainment, and Aardman featuring Shaun and the whole cast, and it doesn’t disappoint. There is plenty of winter mayhem to be had by these lovable characters. Three of my favorite episodes in the collection are “Fireside Favorite,” “An Ill Wind,” and “Shirley Whirley,” but my daughters’ favorite was the title episode “We Wish Ewe a Merry Christmas.”

In “We Wish Ewe a Merry Christmas,” Shaun, Bitzer, and the rest of the gang see the Farmer is going to be spending Christmas Day alone and they can’t have that. They all work through the night, finding a Christmas tree, locating directions, making presents, and getting it all set up before the Farmer wakes up on Christmas morning. It’s that kind of holiday spirit that warms my Grinch heart a bit, so I was happy that Santa Claus also made an appearance to help them out!

“Fireside Favorite” sees Bitzer suffering from a cold. When the Farmer brings him inside to rest and recuperate, Pidsley the Cat gets mad because the dog is in his spot in front of the fire! It becomes an all out battle between the cat and the sheep to keep Bitzer inside where he can get over the cold. Don’t worry though, karma eventually catches up with Pidsley…

With “An Ill Wind,” the Farmer gets an electricity bill with a truly staggering amount and decides to do something about it. He builds a windmill and hooks it up to provide electricity for his house. But somehow I doubt he planned on it becoming an amusement park ride for the sheep which leads to all sorts of fun with the Farmer’s TV set!

Lastly, there was “Shirley Whirley.” If you’ve seen any episodes, you know Shirley as the biggest sheep of the flock and a virtual eating machine. But when she gets so big that Shaun has to enlist help to push her out of the barn, Shaun knows he has to do something… So he puts Shirley on wheels and sets up a remote control to drive her around the farm. Unfortunately, the Farmer’s TV remote seems to be on the same channel, which sends the big sheep zipping all over the place causing havoc!

If you have little ones, they will probably like Timmy Time, which is a Shaun the Sheep spinoff for preschoolers. Included on the DVD is a sneak peek of the show featuring “Timmy’s Tune #1.” Also included is a “Sheep Shearing Game,” but it’s a bit clunky and gets very repetitive for little replay variable.

Shaun the Sheep is always a favorite at our house and whether you’re 1 or 100 I bet you’ll enjoy their antics too! Shaun the Sheep: We Wish Ewe A Merry Christmas is available now!