Tom and Jerry, the cartoon duo of cat and mouse, first appeared in 1940 in cartoons made at the MGM cartoon studio. That would make them both 69 years old in human years. In cat years, Tom would be about 276 years old and I’d hate to know how old Jerry would be in mouse years! 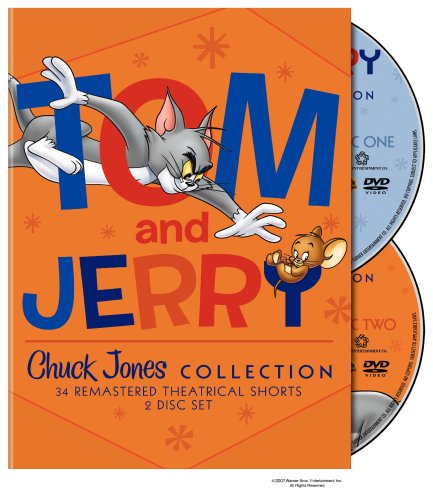 William Hanna and Joseph Barbera created more than 100 Tom and Jerry cartoons between 1940 and 1957. Tom, a house cat, and Jerry, a mouse, managed to destroy millions of animated vases, dishes, and homes over the course of more than 100 cartoons. The series even won seven Academy Awards for Best Short Subject (Cartoons) during those 17 years, competing with the powerful animation house of Walt Disney.

In 1957, MGM closed their animation unit. And in 1960, 12 new Tom and Jerry shorts were created by Rembrandt Films and directed by Gene Deitch. Unfortunately Deitch didn’t have the resources to keep the same smooth animation style and they lost the franchise.

Then in 1962, Chuck Jones entered the picture. Jones was one of the many behind the classic Warner Brothers cartoons in the 1930s, 40s, and 50s, until WB closed their animation studio in ’62. During his tenure at WB, he helped create many of the endearing characters of the age that have survived and even thrived in the years since – Michigan J. Frog, Pepe LePew, Road Runner, and Wile E Coyote, among many others. He was also instrumental in changing Daffy Duck to the egomaniacal scene stealer he remains today.

When WB closed their animation department, Jones created his Sib-Tower 12 Productions company to continue creating cartoons for MGM, and that’s how he came to be involved with the Tom and Jerry franchise. And though they were only involved for four years, they made more than 150 more shorts of this wacky duo of cat and mouse.

In June 2009, Warner Brothers has released Tom and Jerry: The Chuck Jones Collection to feature 34 shorts from the Jones era. These cartoons have been restored to their full widescreen format, as they were originally seen on the big screen decades ago.

One thing I noticed in the early Tom and Jerry cartoons from Hanna-Barbera was that the violence had more consequences. At no time were blood or gore in any of the cartoons, but when Tom was beaten up, he’d get bruises, broken bones, and more. In the Chuck Jones era of Tom and Jerry, the characters were much more damage-proof, similar to the cartoon characters for WB. Tom and Jerry could be crushed by construction equipment, blown up, and smashed regularly and bounce back to continue the chase. As such, I think it lost a bit of the flair of the original shorts.

That said, the Tom and Jerry: The Chuck Jones Collection is very entertaining and worth seeing for anyone who enjoys the chaos and humor of the eternal Tom and Jerry chase. And it’s wonderful to see them in glorious widescreen format, as there are details on the outskirts of every frame that were lost when the shorts were converted for regular television.

In addition, this two-DVD collection includes two features – “Tom and Jerry… and Chuck” and “Chuck Jones: Memories of a Childhood”.

“Tom and Jerry… and Chuck” is an older documentary of the history of Tom and Jerry and Chuck Jones, narrated by June Foray, a star from the world of animation voice overs (as Granny from Tweety and Sylvester, Rocky the Flying Squirrel and Natasha from Rocky and Bullwinkle, and many many others). The documentary covered the very beginnings of Tom and Jerry from creators Hanna & Barbera at MGM up through the Jones era. It was interesting to hear the great Jones talk about taking over the great duo. His perspective is unique, coming from the same golden age of animation as Hanna & Barbera, but as a “risk taker” able to do more with the characters.

“Chuck Jones: Memories of a Childhood” is a more recent documentary from Turner Classic Movies and Warner Brothers, directed by Peggy Stern. Merging hand-drawn animation and interviews with the legendary Jones works beautifully. Jones had a very visual imagination, which translated into his art style. The documentary begins with Jones’ birth in 1912 and works through his childhood watching classic movies starring Charlie Chaplin, Buster Keaton, and others as he grew up on Sunset Boulevard. Once he learned to read and draw, all the pieces were in place… His amazing skills of observation, his imagination, and a love for comedy naturally bloomed into many of the cartoons that I know I will love to the end of my days. I truly appreciate gaining a bit more insight into Jones’ life.

Though these Tom and Jerry cartoons may lack a bit of the spirit of the first wave of the duo from Hanna and Barbera, Jones’ work will leave a lasting impression on the world of animation. It’s hard to imagine a world without Chuck Jones and still a ton of fun to watch his take on Tom and Jerry in this collection of cartoons. Tom and Jerry: The Chuck Jones Collection would be a great addition to the library of any lover of classic animation. Be sure to pick it up at your favorite retailer.

p.s. Beef up your Tom and Jerry collection at Amazon: