Tom and Jerry, the cartoon comedy duo created for MGM by William Hanna and Joseph Barbera in the 1940s, have proven to be remarkably resilient over the last nearly 70 years. Tom, the house cat, and Jerry, the mischievous mouse, have battled in animated shorts through wars, civil unrest, and change in the United States. 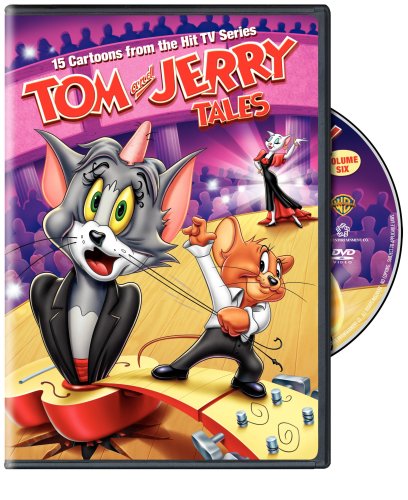 Their latest incarnation, Tom and Jerry Tales, started airing in 2005 and ended in 2008, but the new cartoons live on as they are being released on DVD in a series of volumes. Volume 5 was released back in September 2008 (read my review here) and Volume 6 was released on February 3, 2009 with 15 new cartoons to tickle your funny bone.

Though I think the Tom and Jerry Tales cartoons lack the sparkle of the original Tom and Jerry cartoons from Hanna-Barbera, they are still fun and do capture a bit of that old cat and mouse magic.

The titular cat and mouse find their way to Africa and Australia, defiling historical events, and even performing a dance number. They do get around!

Watching with my two girls, I have to say that “Snow Brawl” and “Snow Mouse” were among their favorites. We’ve had a lack of snow this winter in Colorado, so seeing Tom & Jerry having fun in an indoor/outdoor snowball fight has a ton of appeal – especially when the little guy gets the best of poor old Tom!

“DJ Jerry” was another attempt by the cartoonists to try and modernize things in the age of Eminem that just didn’t work for me. I’ll take “Pecos Pest” with Uncle Pecos saying “Can’t play the gee-tar without a gee-tar string.” Call me old fashioned. For me, “Kitty Cat Blues” on this DVD captured more of the classic feel of a music-related Tom and Jerry, but there’s something about talking in one of these cartoons that doesn’t feel right to me. Some of the best original Tom and Jerry cartoons used no voices whatsoever and were magical.

You can’t beat the original Tom and Jerry cartoons from Hanna-Barbera, but Tom and Jerry Tales does a good job of slapping a new coat of paint on the characters. And these cartoons are chock full of cartoon violence, just like the originals. In an age of too much violence in the real world, it’s nice to know you can still smash, chop, and mutilate cartoon characters with impunity and in good fun!

There are no extras to speak of on the DVD except for a few previews of other WB properties coming to DVD, including A Pup Named Scooby-Doo – Season 1, Tom and Jerry Tales, Volume 5 (read my review here), and Pop Go the Wiggles.

This set of 15 episodes is a solid offering from WB Animation. They’re fun, cartoonishly violent, and keep the spirit of Tom and Jerry alive!

Be sure to check it out at your local retailers or online. You can also find more information about Tom & Jerry Tales at KidsWb.com.

p.s. Pick up Tom & Jerry Tales at your favorite retailer or at Amazon: