In 1999, a new Batman cartoon series began to air on television – Batman Beyond. This was a darker, futuristic world where Bruce Wayne has had to give up the cape and cowl and eventually finds an apprentice, Terry McGinnis, to take up his cause. In my opinion, this was a fantastic series that ended too soon. It was only on television for three seasons (52 episodes) and a direct-to-video movie. The final Batman Beyond episode ended in December 2001. 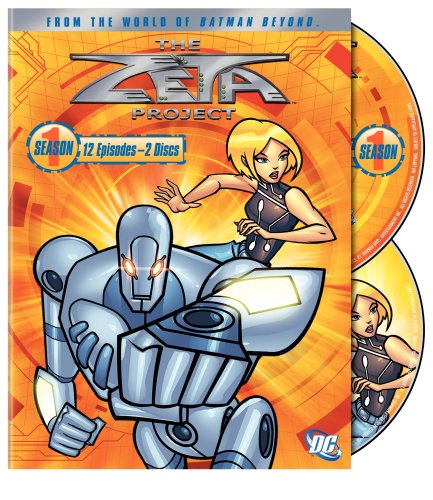 In January 2001, Batman Beyond spawned a spin-off called The Zeta Project. Zeta, an android built to infiltrate and assassinate protected targets, has an epiphany during one particular assassination when he finds that one of his targets is innocent. Because of this, he decides that he no longer can kill and goes rogue. Along the way, he helps people, gains a friend (Ro), and is pursued by Agent Bennet from the NSA who is obsessed with bringing Zeta back into the fold or destroying him in the process.

Zeta originally appeared in a couple of episodes of Batman Beyond — “Zeta” and “Countdown” — which are both included as extras on the second DVD in the set. Miss Martel, a new teacher at McGinnis’ high school, seems a bit odd to him and his friend Max, so he has to investigate and see what he can do to help. He comes to learn of Zeta’s plight and helps him escape the agents pursuing him.

In the series, Zeta has changed a bit to make him more appealing. And the addition of Ro Rowen, a 15-year old runaway girl, helps educate him in how to be more human and blend in. As such, he gains some humor to temper his mechanical personality.

“The Making of Zeta – How the Character and the Series Evolved” provides a great transition between the dark world of Batman Beyond and the Zeta Project series. Bob Goodman, creator/producer, wrote the episodes where Zeta appeared initially. It’s interesting to hear the writers and voice actors talk about how Zeta spun off. Alan Burnett, producer of Batman Beyond says it’s “Like the Fugitive, but with a Robot…” And it definitely has that feel.

It was interesting to sit and watch this series with my daughters. My eldest, now 8, really engaged with Ro’s spunk and sarcastic nature. And my youngest, now 4, just enjoyed the mix of action and humor I think. So it does appeal to the audience that they were looking for.

This DVD set includes 12 episodes from the first season. It also aired a second season of 14 episodes, which should also be released sometime in the future.

If you liked Batman Beyond and are looking for a more kid- or family-friendly but still action-oriented animated series from the early part of this decade, be sure to check out The Zeta Project, Season 1.

p.s. Pick up Zeta or Batman Beyond on DVD at Amazon: