It’s no secret I’m a fan of Scooby-Doo. Ever since I first sat down with a bowl of Fruit Loops on a Saturday morning watching cartoons, the talking dog and his friends Fred, Daphne, Velma, and Shaggy offered bite-sized mysteries perfect for an impressionable kid. Sure, over the years, Scooby and the gang have changed a bit, but the formula has largely remained the same. It always boils down to a boy and his dog hanging out with his friends while foiling the plot of some crazy criminal scheme… 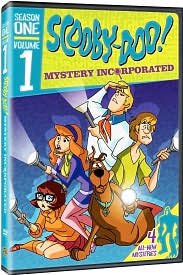 So I was surprised that the new series on Cartoon Network – Scooby-Doo! Mystery Inc. – added so many bells and whistles to the already thin plot and characters that I stopped enjoying it. At times it even drove so far off the rails that I simply turned an episode off rather than wasting more of my or my kids’ time.

Now they’ve started releasing the first season on DVD. Scooby-Doo! Mystery Inc., Season One, Volume 1 collects the first four episodes of the 13 episodes for the first season. I watched because I wanted to see if maybe the first time I watched the cartoons I happened to be in a bad mood or odd frame of mind… Unfortunately, I didn’t enjoy them any more the second time.

“Beware the Beast from Below” re-introduces the characters in their new series as they deal with pressure from their parents to grow up and find more meaningful career options and relationships. Back in their home town of Crystal Cove, Scooby and the gang start the episode being locked up by Sheriff Stone (Patrick Warburton, Rules of Engagement) for eliminating another potential revenue stream for the town by solving a mystery. That line of thinking is repeated in every episode as the Mayor (Gary Cole, Talladega Nights: The Ballad of Ricky Bobby) (Fred’s father) or the Sheriff berate the gang for debunking potential creepy attraction after creepy attraction for the town. To say the least, this particular plot twist is so over the top and used to beat the audience over the head that it gets old quickly.

After that, we learn that Fred (Frank Welker) is more clueless than in any prior series and is obsessed with trap-making; Daphne (Grey DeLisle) is just as in love with Fred as per usual, but less assertive than ever before; Velma (Mindy Cohn) and Shaggy (Matthew Lillard) are in a relationship Shaggy is trying desperately to keep Scooby from finding out about; and Scooby (also Welker) is just as lovable and clueless as always. The gang stumbles into a slime mutant that cocoons anybody who gets in its way and are off and running to solve the mystery.

If that wasn’t enough for one episode, Daphne stumbles across an old locket with a picture inside and the gang gets contacted by the mysterious “Mr. E” (comedian Lewis Black) who tells them they’ve stumbled into an old mystery that may doom them all. [Insert evil laughter here…] The mystery of “Mr. E” is the glue that binds all four episodes on the DVD together leading them to new clues as to the disappearance of an older generation of mystery solving kids.

The one amusing part about the first episode for me was a character who appeared looking a lot like the great Don Knotts. I kept hoping we’d learn more about that character, but it turned out to just be a tourist visiting Crystal Cove and disappeared before the episode was over.

The second episode – “The Creeping Creatures” – leads the gang to Gatorsburg… And it was this episode that really threw me for a loop. Evidently Gatorsburg was once the hub for the manufacture of products made from genuine alligator hide. As Velma tells the story, there was a “Gator well” that “went dry” and ran out of gators. It was about this time I was wondering who wrote this script and if they meant it as a joke that somehow got put into production…

The third episode “Secret of the Ghost Rig” gave me a bit of hope for the series. This was more of a traditional Scooby-Doo mystery with a ghost big rig chasing cars up and down a coastal highway. The truck’s tires were on fire and it was bathed in an eerie fog as it pushed a motorcycle cop and the Mystery Machine (the gang’s green van) off the road. Then the truck would simply disappear… The gang eventually solved the mystery, but it was less tongue-in-cheek than the first two episodes.

And the fourth episode on the DVD – “Revenge of the Mad Crab” – had the gang trying to figure out why a giant man-crab would be terrorizing a girls’ beach volleyball tournament and kidnapping people. This time, the crab eventually snatches Daphne as one of the victims and this drives Fred over the edge. He might even have to admit he has feelings for something other than trap making!

Beyond the four episodes, there are a couple of trailers for other Warner Brothers releases and that’s it. I was hoping to see an extra episode of some other Cartoon Network series or a glimpse behind the scenes as a feature, but this release is very bare bones.

p.s. Pick up this and other DVDs from Barnes & Noble below! 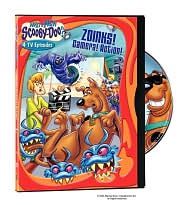 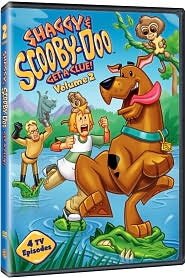 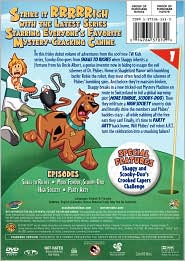