Wow. I presume that when you tour historical sites tens, hundreds, or thousands of years old you feel like you’re standing on the shoulders of giants. After watching Max Fleischer’s Superman, I have the same feeling. This two-disc DVD set includes 17 vintage cartoons created by Fleischer Studios for Paramount Pictures (now in the care of Warner Brothers) that were seen in theaters in 1941 and 1942. And after watching the “First Flight: The Fleischer Superman Series” feature I have even more respect for these groundbreaking cartoons. 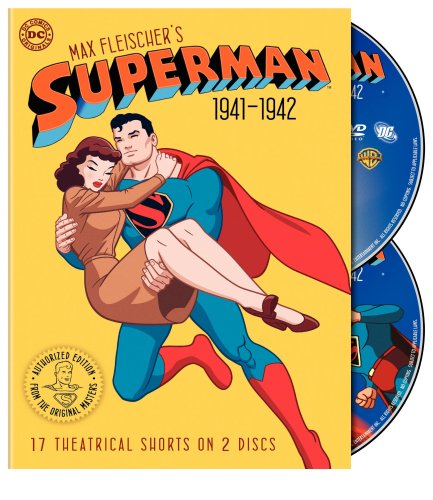 Superman is of course one of those iconic characters that we take for granted. Heroes have been around for ages and are there to provide not only inspiration, but the hope that we can live up to be heroes in our own lives. Superman is the last son of the planet Krypton, granted extraordinary abilities from the yellow sun of Earth, and is both a hero as well as an everyman as his alter ego Clark Kent.

Fun fact… Did you know that when Superman appeared in Action Comics in 1938, he couldn’t fly? He could only “leap tall buildings in a single bound.” He gained the ability to fly because when the Fleischers animated Superman jumping from building top to building top, he looked silly. They asked Action Comics if they could make him fly and they agreed – from then on, Superman was flying on his radio program, in the comic books, in Max Fleischer’s cartoons, and beyond.

When you watch the Fleischer Superman series, if you’re familiar with the reborn Batman and Superman cartoons from the 1990s, you can see the homage. Even today, these are beautifully done animated masterpieces. From the animation and backgrounds to the music, every part of the cartoon was created with love and care.

In addition to these animated shorts, there are a number of features on the DVDs:

Before seeing this two-disc set I had only seen a couple of these animated classics, so it was an honor to sit and get a chance to not only enjoy them for the first time, but to share this bit of cartoon and comic book history with my family.

If you are a fan of animated comic book heroes, this is a must for your collection. Be sure to find Max Fleischer’s Superman at Amazon or wherever DVDs are sold near you.

p.s. Be sure to pick up your copy of Max Fleischer’s Superman at Amazon!

p.p.s. Pre-order Green Lantern: First Flight while you’re at it!