A few years ago in an episode of The Simpsons, Homer Simpson went from the realm of traditional 2-dimensional (2D) animation to a 3D world of computer-generated animation. In the process, they made fun of all the series who had gone from 2D to 3D just to jump on the computer animation bandwagon. Unfortunately for me, Garfield‘s Pet Force falls into the category of cartoons that should have stayed 2D. 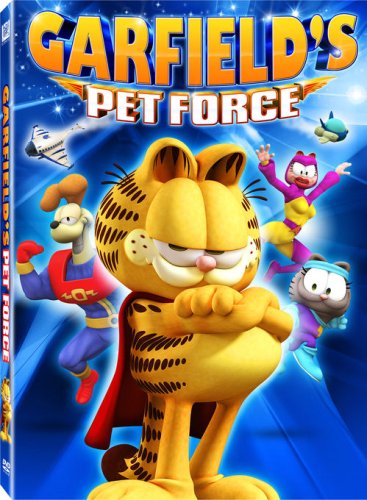 2009 is now the 30th year of Garfield cartoons and associated animation, which is hard to believe. The Garfield syndicated comics have appeared in newspapers since about the time I was able to read. I have fond memories of Garfield, Jon Arbuckle, and Odie in the comics every day and in color on Sundays. Over the last few years however, the comic has stopped being published in my local newspaper and I’ve lost touch with the traditional Garfield attitude.

In my mind he will forever be associated with food, sleep, and a general apathy towards anything requiring effort. “I hate Mondays,” still resonates with me. And both Garfield and I share a love for good lasagna and great sleep.

However, it appears that Garfield is making a comeback. The Garfield Show is a new computer generated cartoon has been in the works since 2008 and will begin airing on Cartoon Network sometime in 2009. This isn’t his first trip to television, but it’s been a while. Garfield and Friends ran from 1988 to 1994 and before that there were a number of cartoon specials.

And in June 2009, Garfield’s Pet Force was released to pave the way for the fat cat’s return to TV.

The Pet Force protects planet Dorkon from the villains that would see it destroyed. The Pet Force consists of: Odious – a Super-Odie with a super stretchy tongue that can be used to stun his enemies; Abermal – a Super-Nermal being with the ability to pester at super speeds; Starlena – a Super-Arlene with the ability to freeze enemies with a look; and Garzooka – a Super-Garfield and the leader of the Pet Force with super strength and radiated hairballs to stick to his enemies and generally gross them out.

All of these characters appear in a comic book in Comic Strip Land. And as Nermal reads the latest issues of the series, we find the Pet Force in dire trouble from Vetvix, a villainess who has stolen a molecular scrambler gun (the “Moscrambulator”) and has been using it on the people of Dorkon, including Emperor Jon and most of the Pet Force heroes. Only Garzooka escapes her evil clutches to find help.

Though I know my two girls enjoyed the movie (ages 4 and 8), I have to say that it really wasn’t for me. A couple of major things stood in my way…

First, it was computer generated and didn’t have a connection to the real world. Though the characters were the same, the artists seemed to make things too clean and shiny. Garfield for me is about the imperfections in life and if his world is perfect. In the movie, he and his friends have a “comic strip” to do like a job on a television show. Somehow, it removes the setting too far from the everyday.

Second, the voice of Garfield didn’t work for me. Instead of Bill Murray, who did the voice in the big screen Garfield movies, or Lorenzo Music, who did the cat’s voice in the earlier animated series (and died in 2001), they asked Frank Welker to do it. And though I love Welker, who has been doing the voice of Scooby-Doo and Fred Jones in the Scooby Doo animated series and movies for years among other properties, there’s something missing. I suspect that it will just take some getting used to Welker doing the voice.

In addition to the movie on the DVD, there are a couple of trailers (“AAA Presents Keep Your Children Safe in the Car – Tips for Parents,” and Dr. Dolittle: Million Dollar Mutts) as well as a DVD-ROM game called “Professor Wally’s Moscrambulator”.

Like all DVD-ROM games, you have to access it from your DVD drive on the computer (not from a DVD player application like Windows Media Player). “Professor Wally’s Moscrambulator” is a Flash game, with the characters and interface distinctly 2D instead of 3D like the movie. The object of the game is to create your own superhero from various body parts and then select a costume. It was sort of fun to create an Odious with the body of Abnermal and then throw on a bizarre costume. When you’re done, you can print it out. Though it’s kind of neat, I would think it would get very old quickly for kids.

If you’re a huge fan of the older Garfield cartoons, I’d stay away from Garfield’s Pet Force before you check out the upcoming The Garfield Show on Cartoon Network later in the year. But if you have kids who like action adventure cartoons, this probably isn’t a bad one to get. You can check out a trailer for the film at its official web page at Garfield.com and then pick it up from your favorite online or brick-and-mortar retailer.

p.s. Click here to pick up this and other Garfield cartoons at Amazon: