Among the many reinventions of Scooby-Doo over the years, A Pup Named Scooby–Doo aired 30 episodes scattered from 1988 to 1991. In this incarnation, the Scooby-Doo Detective Agency solved crimes as a bunch of kids, including Freddie, Daphne, Shaggy, Velma, and of course Scooby-Doo as a puppy. Though I can’t say I saw any of the episodes when they originally aired, I watched quite a number of them when they were shown on Cartoon Network after my first daughter was born. She was (and is) a big Scooby-Doo fan, as is her younger sister. 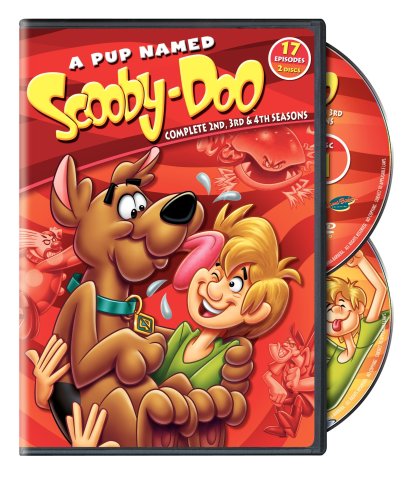 As kids, the Scooby gang was a bit more exaggerated than in the original series or even its modern counterparts. Each character had one or more “schticks” as a kid. Keep in mind that the series was really more for younger kids than anyone else, so the exaggerations made them that much more memorable.

For example, Freddie has a runaway imagination, often accuses the wrong person (his arch nemesis and town bully, Red Herring) of a crime, and loves to read the National Exaggerator. And if there’s a monster, such as Bigfoot, the Loch Ness Monster, or Chickenstein (my favorite), Freddie will point a finger at it as the culprit.

Following the same pattern, Daphne is a vain, sarcastic little girl waited on hand and foot by her butler, Jenkins. And though she trusts her intuition to help her solve mysteries, she’s often wrong like her friend Freddie.

Shaggy and Scooby are pretty much as they are in the main series… always eating and always getting in trouble.

And whenever you hear Velma say the word “jinkies,” you know the mystery is about to be solved.

The seventeen episodes in the DVD set include some of my favorites from when I would watch with my daughter. “Chickenstein Lives!” still makes me giggle. What would be more amusing than a monstrous Chicken brought back from the dead by a mad scientist? And “The Were-Doo of Doo Manor” pits the gang against a professor who turns into a Were-Doo under a full moon.

Though not ground-breaking in style or substance, A Pup Named Scooby-Doo was fun animation. It was nice to get to know a bit about the kids’ and Scooby-Doo’s (exaggerated as they are) parents and families. Seeing Scooby-Doo’s Mom and Dad always puts a smile on my face. They’re just as warped as Scooby is!