Comic books are one of the guilty pleasures I gained as a kid. I grew up raised by two English teachers as parents and my Mom was never too keen on me spending time reading comics. It wasn’t until I was in high school I finally picked up a few here and there, but long before then I’d found my Uncle’s stash of old Marvel comics at my Grandparent’s house in the back of a closet. Any chance I had I’d dive into classic Spiderman, X-Men, and Fantastic Four stories. 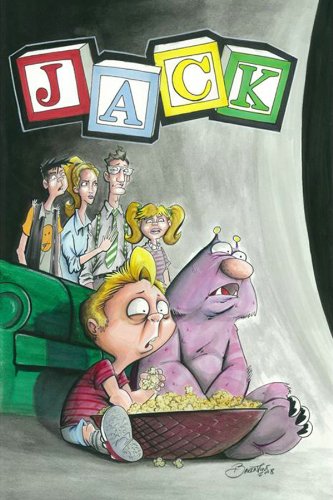 For me, comic books epitomize the marriage of storytelling and art. When a great artist and a great storyteller meet, there’s no limits to what they can accomplish. And now that I have a daughter with a knack for art and an interest in telling stories, I’m finding ways to introduce her to the wonderful world of graphic novels so she can learn more about a potential hobby or career path.

A couple of years ago I reviewed Howard Lovecraft and the Frozen Kingdom by Bruce Brown and Renzo Podesta which managed to tell the creepy story of a young H.P. Lovecraft and his adventures in other dimensions and worlds inhabited by the creatures of Lovecraftian horror. Brown and Podesta managed to capture not just the horror factor but the innocence of a childlike fascination with the unknown.

Brown is back now with a new book – Jack and the Zombie Box – which brings his storytelling ability together with artists Mike Barentine, Rafel Hurtado, and Shawn DePasquale to tell the story of a father in over his head with his kids while his wife is away. Now, being a father, I understand far too well the troubles that can happen when you’re occasionally on your own as a single parent. But thank goodness Brown and his team of artists managed to capture the humor more than the horror in this particular situation.

The story starts with a quote from one of the funniest people I know – Bill Cosby – “Parents are not interested in justice, they’re interested in peace and quiet.” And I’d have to agree with that assessment 9 times out of 10! That quote however sets the stage for the magic that only children can achieve on a regular basis… the ability to take one small thing – whether it’s a phrase, a song, a TV show, or whatever – and turn it from innocent to annoying in the blink of an eye through the power of repetition.

Jack is the youngest of the three children of Brad and Teri, and he’s a handful. With his big imagination, he and his toys get into adventure after adventure that unfortunately have the side effect of driving his Mommy a bit crazy. Teri is getting ready to go to a conference, but is concerned that her husband won’t be able to handle the kids. Brad isn’t as worried and thinks he has a secret weapon – DVDs of old cartoons like “Larry and Dewby Dog.” Jack loves the cartoons and as Brad says – “It’s just Larry and Dewby Dog. What could it possibly hurt?”

The first night that Teri is gone, Brad and the kids have a “home cooked meal” from Cowboy Bob’s burgers and enjoy a night in front of the TV with Larry & Dewby… That combination repeats for the next few days and when Teri gets home, there’s a little problem. Jack wants to watch Larry & Dewby and have Cowboy Bob burgers… forever!

I won’t spoil Brad’s solution to the problem, but it made me laugh out loud.

The artwork is bright and family-friendly, the story is great fun, and the combination provides 40+ pages of entertainment. Jack and the Zombie Box is another comic book I’d be happy to share with my eldest daughter. She might even catch the Scooby-Doo-like references of “Larry and Dewby Dog,” as I’ve shared more than a few of the cartoons from my childhood with my kids. And no, my name’s not Brad!

Be sure to check out Jack and the Zombie Box when it’s released in May 2011 at Amazon and other retailers!

p.s. Pick up this and other books from Bruce Brown at Amazon below: