Recently I became worried when I saw little Cthulhu-themed toys appearing as geeky gifts. Small plastic creatures from the netherworlds of H.P. Lovecraft should stay where they belong. However, with Lovecraftian horror making a comeback of late, perhaps I was a bit hasty in my assessment of these strange little tsotchkes. Maybe there’s room in the realms of the Old Ones and the Deep Ones to ensnare a new generation of fans by enticing them with toys! 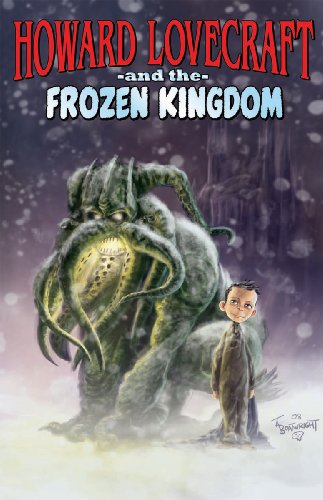 In that vein, I recently had the opportunity to review a new Lovecraft-inspired graphic novel from author Bruce Brown and illustrator Renzo Podesta – Howard Lovecraft and the Frozen Kingdom. The title sounds so innocuous… and when you see the cover with a boy and this strange looking green creature, you wonder what kind of a journey this kid might be taking…

Young Howard Lovecraft begins the adventure by going to the Butler Sanitarium with his mother to visit his father Winfield Lovecraft, a patient there. The first panel of the chapter quotes Edgar Allen Poe – “Ah, distinctly I remember, it was in the bleak december, and each separate dying ember wrought its ghost upon the floor.” The line is from Poe’s classic work The Raven, which perfectly sets the stage for delving into Lovecraftian horror. From that point forward, Brown had me in his clutches.

It’s Christmas Eve, 1894, and the mother and son have come to see the father, driven mad by something he’d done. Howard’s father goes into a spasm of paranoia and fear, begging his son to destroy a book that he should have never written. The boy doesn’t scream during the incident, but does go home with a small gift – a paper star made by his father.

Once home, Howard’s mother gives him a book – an early Christmas present from his father. As he begins to read it, he’s drawn into a dark, cold world of magic and deceit. The book tells of a place – R’yleh – a “kingdom described as an unholy marriage of fairy tales and nightmares.” Unwittingly, the boy reads a few words written in the book in a strange language – and is sucked through a whole in the fabric of the universe.

He meets a Deep One, Thu Thu Hmong, who initially tries to kill Howard but comes around after the boy saves the creature’s life. This is the green creature from the cover of the graphic novel. Howard, who fails to pronounce the creature’s name, simply calls him Spot. From that point on, things get very interesting for the young Lovecraft as he is drawn into the intrigue of a strange new world.

And though Brown has an amazing gift for making dark tales fit the pages of a comic book, it’s matched by his illustrator. Podesta has a gift for creating eerie illustrations with multiple levels to them. For example, the title page for Chapter One shows Howard and his mother entering the front doors of the sanitarium. But the scrollwork on the doors appears to be a pair of creepy eyes and coming out of the doors are giant tentacles belonging to a creature inside the door. Does it want to eat them? Or is it merely welcoming them to the madness within? The art reminds me a bit of Frank Miller‘s The Dark Knight Returns, with its dark, almost mono-chromatic buildings drawn to evoke a gothic feel.

Podesta also has a gift for capturing the innocence of Howard when he’s dealing with the insanity in the world of the Old Ones and Deep Ones. For example, when Howard names the strange green critter “Spot” – I giggled with the boy’s wide eyes and honest smile.

Though this is definitely a graphic novel for adults, I would caution parents from giving it to children who might be too young to understand how creepy the world of H.P. Lovecraft’s stories is. A child might read it and not truly understand what’s happening, or they may be scared deeply by some of the bizarre creatures and cutthroat behavior exhibited by the denizens of the world Howard finds himself in.

Howard Lovecraft and the Frozen Kingdom should be available at comic stores in January 2010 and from Amazon in March. If you’re a fan of H.P. Lovecraft’s work, this is an amazing effort from author Brown and illustrator Podesta that you should definitely check out. I want to know when Howard’s NEXT adventure is coming out!

p.s. Look for this graphic novel and other HP Lovecraft works at Amazon: