Have you ever had a sinking feeling when you read a new book by your favorite author? I’ve read the last three books from Thomas Emson – Skarlet, Maneater, and Prey. He’s brought vampires and werewolves into the real world, so I was looking forward to seeing what he’d do with zombies. 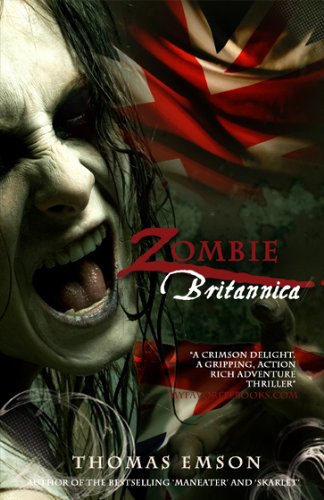 I love zombies. But I really only love them when they’re presented in a unique way, not relying on standard cliches. Unfortunately, I found myself wondering when the bad zombie movie would end.

Zombies are wonderful beasts. They’re men, but they’re monsters. Add in the fear of disease, the dead rising, and the repulsion of teeth ripping human flesh and organs, and you can really push some buttons. George Romero knew this when he wrote and directed Night of the Living Dead in 1968. He and other directors and movie makers have been terrorizing moviegoers ever since.

More recently there have been some great zombie novels that have been reinventing the genre. Mira Grant’s FEED and Jonathan Maberry‘s Patient Zero have been among my favorites. Grant merges blogging, politics, and a zombie apocalypse and Maberry uses biological warfare to spread a zombie plague.

With Emson’s previous reinvention of vampires and werewolves, mixing myths and history with the modern day, I was expecting more inventive approach to zombies. That “inventiveness” only went as far as having the dead rise during a particularly nasty heat wave in Great Britain.

Three main characters drive the action… Carrie Asher is a mother seeking to get through a zombie-infested London to rescue her six-year-old daughter Mya. Vincent is a young man stuck in a Welsh castle with the girl he loves and the zombies closing in all around. And Craig Murray is trapped with his family in a traffic jam in Scotland. Not only must he battle the undead, but the people seeking to prey on the weak during a time of crisis.

Woven into the narrative are all the typical zombie tales… They eat flesh and infect those who get bitten and manage to survive an attack. The survivors are like zombie grenades thrown into the future. When the victims die, they become zombies themselves. Add to that the people who break under the pressure – relying on their dogma to explain the situation, controlling others through fear and intimidation, and the people who simply give up.

I really like Emson’s prose, but I couldn’t get past all the cliches. Perhaps if I’d seen this on the big screen instead of read it as a novel, I would have enjoyed it more. But it’s been done to death, no pun intended.

If you’re interested in how the zombies capture London, I’d recommend the book. But if you’re looking for an original take on things, I’d avoid Emson’s Zombie Brittanica. Instead, check out his books Skarlet, Maneater, and Prey.

p.s. Check out these great books below: