A few months ago I was privileged to read Thomas Emson‘s vampire tale, Skarlet, and really enjoyed it. I’ve always had a fascination for magical creatures in a mundane world and the world of Skarlet had a history and magic all its own. 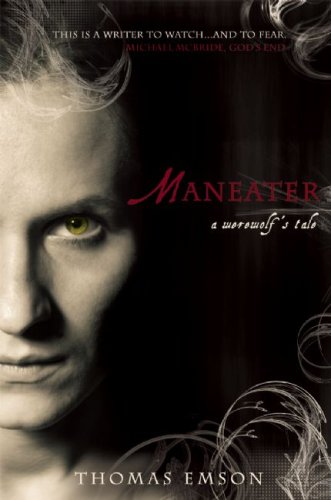 After that, I had a chance to interview Emson and learned that a new novel in his werewolf series was coming out in February 2010, so I knew I needed to catch up a bit and read Maneater. Once again, I wasn’t disappointed.

Laura Greenacre isn’t your average girl. You really don’t want to get her angry or meet her in a dark alley when she’s mad. She may do worse than kill you. What’s worse you may ask? How about watching as your internal organs are eaten as you die? I think that qualifies. She has more than a bit of a violent streak.

And that violent streak is well earned. She watched her parents die when she was but a child – murdered as part of a family cleansing in a war between bloodlines that had gone on for ages. But she’d forgotten about all that. She tried to be normal. It just didn’t pan out for poor Laura.

On the other side you have John Thorn, a policeman assigned as a bodyguard to Sir Adam Templeton, a respected upper-crust member of British society. His family had power and influence and had grown to enjoy frequent abuses of those tools. Some of the younger members of the family wanted more. Thorn didn’t care about all of that. He simply tried to do his job the best he could.

But when Thorn gets between Sir Adam and Laura, things get a bit hairy. And that’s when the body count in the book begins to rise.

Maneater, like Skarlet, has a feeling of history to it. Unfortunately, where Skarlet provided more of that history to provide the backdrop for events in the present day, I felt that Maneater didn’t quite have the balance right between the past and the present. In this novel you have the present day, just a few years ago, and the distant past, and in places I felt that the past didn’t really come into play except at a very superficial level.

I actually wanted to know more about the history between the Templetons and the Greenacres. We learn late in the book some of the history that goes back to a time before the Roman Empire in Italy. It goes back to the story of Romulas and Remus, two Etruscan brothers. And unfortunately for me, the history is really just glossed over.

Other than that quibble, which I’m guessing will be cured by more books in the series, I really enjoyed Maneater and look forward to the sequel – Prey. And I’m very excited about the sequel to Skarlet that’s in the works as well – Krimson. (Check out my review of Skarlet here and my interview with Emson here.)

Be sure to check out Maneater before the sequel Prey hits a bookshelf near you!

p.s. Click below to pick up or pre-order this and other works from Thomas Emson from Amazon: