In the mid-80s, I started reading quite a bit of spy novels set during the Cold War. The detente between Russia and the United States echoed in much of the literature of the time, from the stories of Ian Fleming‘s James Bond to the novels of Robert Ludlum, Ira Levin, Frederick Forsyth, and Ken Follett. Depending on where you turned, the Nazi legacy lived on around the world. 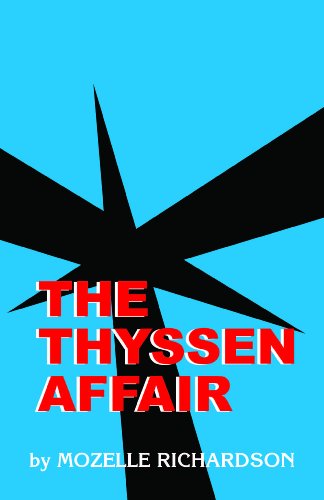 So when I saw the description of The Thyssen Affair by Mozelle Richardson, I was excited. Here was a story that brought together remnants of the WWII OSS, its successor agency the CIA, the Israeli Mossad, the Russian KGB, and echoes of Nazi Germany. Plus, it stars Canyon Elliot, a Colorado rancher and retired intelligence officer as the main character. How could I pass it up?

The story begins with Elliot being brought in on a CIA operation by a friend of his – Peter Landis. Peter, currently working at the CIA, was a good friend of his son before he was killed in Vietnam. Peter’s request is simple – take a skull to Munich, Germany, and figure out why the KGB went to the trouble to dig it up from a graveyard on the site of an old POW camp in Fort Reno, Oklahoma. Simple enough, right?

Unfortunately, as with most things, his trip is anything by simple. By the time he gets to New York to head across the Atlantic, he has to lose someone tailing him. But by the time he gets to Munich, he realizes there has to be more to the skull of this German officer, Major Von Stober…

The Thyssen Affair starts quickly and doesn’t let up to the end. And if you like your spy fiction with explosions, gunfire, and knife fights you shouldn’t be disappointed. It’s a chess game between Elliot and the people trying to keep him from the truth but when the lovely KGB agent Anya comes into the picture, she does more than ruffle his feathers as the two leapfrog around Europe.

Richardson’s style reminded me quite a bit of the Ludlum novels I read as a teenager. It’s a quick read with intricate twists and turns, but like with Ludlum, the conspiracies and intrigue are nothing without great characters. Ultimately it’s those characters and the way their backgrounds bubble up to explain their motivations that really made this story work. Sure there’s a great deal of spy vs. spy action as well, but the character details are the glue that holds everything together.

The other aspect of her style I absolutely loved is that this is set in 1980. There are no computers, no cellular phones, no James Bond Q-Branch gadgetry… Elliot and the rest of the gang have to rely on tried and true spy methods. Codebook stuffed in a hollowed out heel of a shoe? Check. Microdot copy of a map to Nazi treasure? Check. Standard hand to hand, knives, and guns? Check. And in most cases, Elliot is forced to use is brains to think his way out of problems more often than not.

As I read along, I couldn’t help but think the book would make a great movie in the style of the James Bond films of the 1960s and 1970s. I’m not sure who they’d get to play Elliot, but perhaps someone like Tommy Lee Jones could pull it off.

The Thyssen Affair was a fast, enjoyable read. If you’re looking for a good spy novel from the Cold War, be sure to check it out!

p.s. Pick up this book and other Cold War spy novels from Barnes & Noble below!