It’s been a while since I was motivated by a new author to read an entire book in the space of only a few hours over a couple of days. But it’s always an unexpected joy when it happens. The magic of being transported not only to new places or times, but new ways of thinking, is impossible to ignore.

Let me start at the beginning, but from a different direction than you might expect. Thankfully I was born into a family that not only appreciates music, but likes to play and sing together or apart. My mother played piano before her hands were twisted by rheumatoid arthritis. My father still plays guitar – a twelve-string Fender acoustic – with an ability to pick rich melodies from those taut skinny wires. And my sister and I played saxophones, guitars, and piano (she more than I). Between the occasional rag on piano, jazz or concert band practice, and a million folk songs on guitar, there was live music at my house pretty much every day.

That childhood of music has served me well long into my adult years and I still play my guitar occasionally and sing with my daughters, my wife, and the rest of my family at the occasional gathering. More than that, I’m always listening to music new and old. And over time I’ve gained a perpetual soundtrack running through my head with a mix of tunes from musicals, bluegrass melodies, folks songs, rock bands, a cappella voices, jazz licks, movie soundtracks, and much much more. 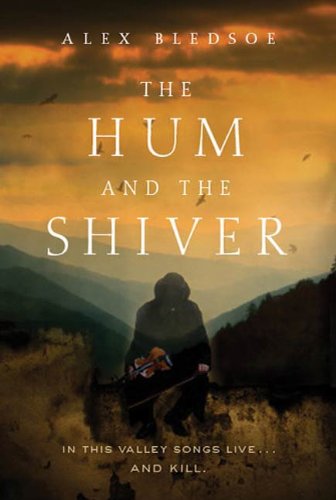 Why the long reveal about my musical childhood? The Hum and the Shiver by Alex Bledsoe shows an appreciation for a life of music I’ve rarely seen in fiction, let alone urban fantasy from a new author. And Bledsoe’s tale weaves the magic of ancient songs and lyrics seamlessly into a world both touched and untouched by modern sensibilities and dangers. Most of those involved in the story are from a group of folks known as “The Tufa” – a secretive group living in the Appalachians. Though the question “Who are the Tufa?” is asked multiple times and eventually answered, how the reader gets to the answer is more important than the destination…

The story is about Private Bronwyn Hyatt, her immediate family, and their extended relatives in Needsville, Tennessee. Bronwyn returns from Iraq after surviving a horrific attack and heroic rescue, but her wounds need healing both outside and in. And as she returns to some sense of normal as muscle and flesh knit in the home she grew up in, she realizes there’s more going on she’s going to have to deal with. Can she figure out what the “haint” (ghost) wants her to do so she can avoid its ill portents of a death in her family? Can she find her song and learn to play her mandolin again so she can learn her mother’s song? Can she rediscover herself in the context of Tufa ways?

And tied into all of this are other characters. Craig Chess, a Methodist preacher, is trying to make inroads into Bronwyn’s community instead finding a solid resistance to outsiders. Dwayne Glitterman, Bronwyn’s former flame and bad-boy on a path to ruin. And newspaper reporter Don Swayback, asked to get an interview with Bronwyn the war hero, who starts to discover deep personal connections to the people of the town of Needsville he never knew existed…

Alex Bledsoe’s rich, nearly poetic prose in The Hum and the Shiver captured me at page one and didn’t let me go to the end. If you are a fan of urban fantasy, this is a book you need to add to your list today. There are secrets ancient and wild waiting for you to discover, and I enjoyed every moment.

The Hum and the Shiver hits shelves September 27, 2011, and I can hardly wait to see what’s next in the series from Bledsoe. For more about Bledsoe, check out his website.