Though I’ve reviewed a few books that didn’t pan out like I hoped, one of the things I enjoy about writing reviews is getting a chance to read things I might not have picked up for myself initially. I tend to wear blinders sometimes, focusing on those writers and genres I would normally pick up or consider picking up for myself. In the second half of 2011, my friends at Tor Books threw me a curve ball that I wasn’t sure I’d enjoy. Turns out I actually did! 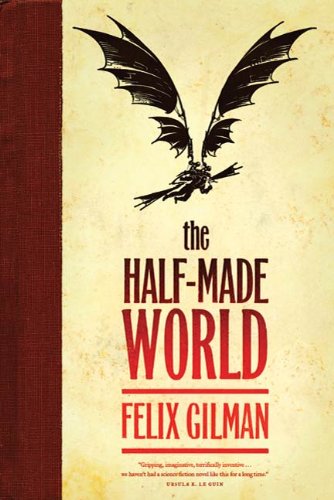 The Half-Made World from Felix Gilman merges many genres to define its world, yet does so effortlessly. Sure, there’s a little steampunk, a bit of a Western vibe, a pinch of fantasy, and a smidge of alternate history, but it’s not like Gilman put them all in the blender and set it to puree. Each element is gradually introduced, from the psychologist Liv Alverhysen to John Creedmoor, an agent of the Gun and to Linesman Lowry, an agent of the Line – each of the three is seamlessly woven together around a single mysterious character, Liv’s patient – The General – and whatever secrets his addled mind may be hiding…

Quite honestly I wasn’t sure what to expect from this book. Like many adventures, it begins with the three main characters starting out their journeys and ends in an explosive way when those three paths meet. And yet the way world elements are introduced, through flashbacks of the main characters, exposition in characters we meet along the way, and then through children’s books read along the way and snippets of conversation, it all seems so natural and organic that it gently tugs you along towards the conclusion.

The larger organizations of the Line and the Gun were quite intriguing to me and I only caught glimpses of their philosophies as the story progressed. The Line was easiest to figure out as the embodiment of progress. In this case, it was the railroad line and the Engines that drove things forward. The Gun was a bit more difficult. I believe the Gun falls on the side of rugged individualism and the Western spirit.

Beyond that, each side had an intriguing “spiritual” aspect that spoke to its agents in various ways. The Line almost seemed a bit like George Orwell‘s dystopian 1984, with the individual suppressed in favor of the larger machine. And the Gun, though I’m not a big fan of Westerns, hit me something like the lone gunman approach of many Spaghetti Westerns of the 1960s.

The characters’ relationships with these disembodied leaders also varies a bit. A Linesman doesn’t dare question orders, just plowing forward at any cost. And Agents of the Gun seem to have a back and forth conversation with the “demons” inhabiting their namesake weapons. It was almost like the “devil on your shoulder” approach talking you into doing things you don’t believe you should.

The Half-Made World by Felix Gilman is a tough book to pin to any one genre, but I think it should be enjoyable to anybody who likes their fantasy and science fiction with a bit of a philosophical bent. Now I’m going to have to see what else Gilman has written!