As we grow ever closer to the year 2012, the year the Mayan Calendar ends and Doomsayers are predicting the end of the world, I find it interesting that more movies and books are entering the market to ride that wave of fear and paranoia. What’s even more interesting is the number of documentaries, such as Yellowstone: Battle for Life and 2012: Science or Superstition actually raising the legitimacy factor in some of these doomsday scenarios. 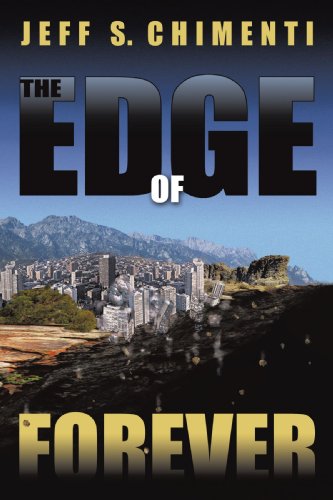 Now let’s bring in Jeff Chimenti and his novel The Edge of Forever, which explores, in depth, the potential destructive power lying dormant beneath the Yellowstone Caldera in northwest Wyoming. What would happen if the it erupted? How many would perish and how would it affect our world?

Chimenti takes a trio of brothers – Michael, Stephen, and Mark Hanson – modeled after his own three sons – and propels them into a world on the brink of global geological upheaval. Add to that… a military facility creating deadly agents for biological warfare, corrupt politicians with big ambitions, and a jealous, abusive husband willing to do nearly anything to keep his wife away from any potential avenue of escape… and you have the major elements of this story.

Michael is an ex-military man recovering from the loss of his wife and daughter in an auto accident a few years prior. He’s driving to see his family in Denver when he chooses to help a waitress, Cassie, escape from her abusive husband. Some of the scenes involving Michael, Cassie, the husband, and a contract killer are quite graphic and disturbing. Chimenti doesn’t pull any punches.

Stephen, Michael’s brother, is a geologist working in Yellowstone National Park investigating unusual activity under the caldera when he discovers the impending extinction event building up. This event will be similar to the one that killed 96% of all life on Earth and wiped out the dinosaurs. As he discovers more, he lets his brothers and their families know so they can together form a plan to try and save themselves.

Though I was drawn in by the story and the characters, I was fascinated by the science. As a doctor in Texas, Chimenti has an amazing talent for breaking down complex scientific processes for his audience. Though I was somewhat familiar with some of the geological theories discussed, I learned quite a bit about newer terms such as the “Verneshot” – a large chunk of the crust launched into the air that comes crashing down elsewhere leaving huge swaths of destruction in its wake.

Overall, I have to say The Edge of Forever kept my interest from the first few pages to the explosive finale. I was rooting for the good guys from the very beginning and will be interested to see what happens in the next book – The Edge of Forever: Brink of Extinction – which will be released in January 2010.

If you like your disaster action adventure fiction with some serious science behind it, I can definitely recommend Jeff Chimenti’s The Edge of Forever.

p.s. Pick up the book and other related items below!