Last year, I had the pleasure of reading Patient Zero by Jonathan Maberry, which took the concept of a zombie plague and put it in the hands of a group of terrorists. Joe Ledger was the hero recruited to take on the shambling, infected dead and find a way to stop them as part of the Department of Military Sciences (DMS) – a super-secret group of highly-trained and resourceful individuals tasked to take out the threats the normal police or military forces of the United States can’t handle. 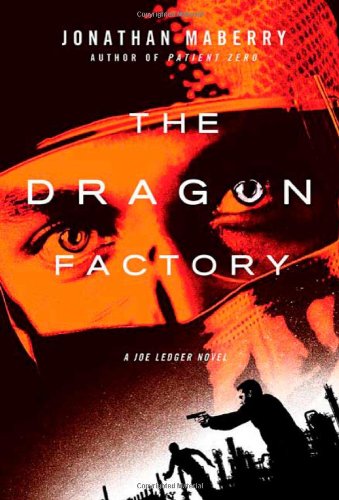 Now Maberry has managed to take evil to a whole new level with The Dragon Factory. Not only does the terror fit in a timebox of one week, it merges cutting-edge genetics and biological science with the eugenics goal of the Nazis of World War II as they strived to create a “master race”.

Consider what would happen if the cloning experiments described in Ira Levin‘s The Boys from Brazil had the technological tools and expertise of today. Now multiply that by a factor of 1000. As the novel progresses, the depths of depravity and layers of pure evil reveal themselves to be imaginative, inspiring, and horrific all at the same time.

On one side you have the beautiful Jakoby Twins – brilliant, elusive, perfect albino twins engaged in creating genetic mash-ups of existing creatures to form monsters and mercenaries capable of wanton destruction at the drop of a hat. On the other side, you have their father – Cyrus Jakoby – striving to not only create the Nazi Master Race, but rid the world of impurities as Adolph Hitler began to do during his reign of terror.

Between those two factions we find a race against a doomsday clock (called the “Extinction Clock”) nobody knows about until it’s almost too late and Joe Ledger and his friends fight against the odds to save the world from the depths of depravity and madness. Ledger fights the evil on his own terms – but is the sacrifice too high this time?

Honestly, I love it when novels manage to work in not only artifacts of the present, but the echoes of history that are far too often forgotten. Maberry does both in spades while putting you on a heck of a rollercoaster ride. And don’t worry – there’s lots of gunfire, knife fights, and grenades to go around.

Though there is some serious science embedded in the pages of The Dragon Factory, I never found myself bogged down anywhere. His explanations were simple enough to keep the plot moving and the action hardly ever let up. Even the occasional love scene rarely slowed the novel’s pace. Merging the dangers of genetic and biological manipulation with the unfathomable evil of the plans for the Nazi Master Race was a brilliant yet terrifying reminder that humankind is capable of truly beautiful and horrible things.

Maberry has written multiple novels, magazine articles, and plays while also teaching writing. I don’t know where he finds all the time. His novels include Ghost Road Blues, which won the Stoker Award for Best First Novel in 2006, Dead Man’s Song, Bad Moon Rising, and Patient Zero, which was recently optioned for television. And when he’s not writing novels, he writes for several Marvel comics, including The Black Panther and other heroes including Wolverine, Spider-Man, The Punisher, and others.

If you like fast, intelligent action thrillers, I can highly recommend Jonathan Maberry’s The Dragon Factory to be on your list of books to read. And if you haven’t read Patient Zero, I’d encourage you to pick that up as well. They’re both fast reads with some serious crunch. I can hardly wait to see what’s next for Joe Ledger – and I’d love to see Patient Zero done well on television!

p.s. Pick up The Dragon Factory and other Jonathan Maberry books at Amazon: