Supernatural is regular viewing at my house. My two daughters can probably tell you more about Sam and Dean Winchester than I can. And we’ve enjoyed watching the storyline develop since the series began in 2005. I have to admit that Season 5 got a little dark for my tastes as the battle between Heaven and Hell waged on Earth, but Season 6 has found the spark again. (The episode “Clap Your Hands If You Believe…” about the faerie invasion had some great moments!) 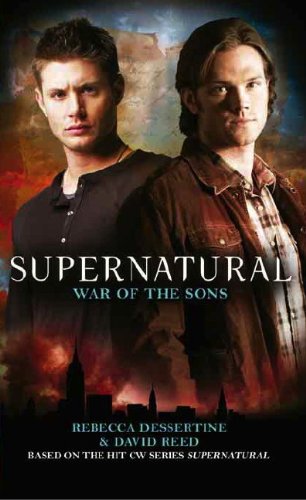 If you’re not familiar with the series, Supernatural focuses on the lives of the Winchester brothers – Sam (Jared Padalecki) and Dean (Jensen Ackles) – and their quest to save good people from bad things. Though it started with the monster of the week format, over the last few seasons it developed its own world where Angels, Demons, and various things that go bump in the dark try to find their own niche in the world by taking out a few mortals along the way. But it’s really the relationship between the brothers – the dialog dripping with sarcasm and sharp wit – that keeps us tuning in season after season.

That said, I tend to avoid books associated with movies and television for the most part. Yes, occasionally I’ll pick up an art book or a behind the scenes book here and there, but not regularly. And fiction associated with such properties I usually ignore. That started for me back in the 1980s when I read the novelizations of a few movies like Star Wars and found them lacking the magic of the original form.

So how did I end up reading Supernatural: War of the Sons? I honestly don’t know. But my daughters probably had something to do with it.

The book takes place before the end of Season 5 when Sam and Dean are frantically trying to find a way to put Lucifer back in his cage. Desperate to avoid becoming “meat suits” for the Archangel Michael (Dean’s “destiny”) and Lucifer (Sam’s “destiny”), the pair hunt all over trying to find something – anything to help them out. This quest leads them to a small town in South Dakota where they meat Don, an angel with a possible solution to get out of the mess they’re in. Though angels usually try to screw them over, Sam gives in to his desperation and the boys find themselves on a mission through time…

Yes, you read that right. Time travel. It’s not the first time it’s come up in Supernatural. Dean’s made a few trips back in time to when his parents were just starting out. But this trip is more than a few years – Don sends them back to 1954 on a quest to find the last few pages of the Dead Sea Scrolls. The Scrolls may offer a battle plan to defeat the Devil. All they had to do was get them and return back to 2010.

Sounds simple, doesn’t it? Of course it’s not. Along the way they run into some friends – Walter and Julie – who alternate between wanting to kill them or help them. They also run into the demon who wanted to be the wife of Lucifer instead of Lilith – Eisheth. She’s a real treat with a few secrets of her own concerning Don, the angel who put everything into motion.

Really this was a fun tale in true Supernatural fashion. Not only do you get the usual sarcasm, wit, and hunting with the Winchesters, but you learn a bit about the Dead Sea Scrolls and take a deeper dive into the world of angels and demons.

Included in the fiction were a few comments on life today from the boys’ perspective in 1954. When Sam is forced to visit a library instead of surfing the net for his research, he notes: “Rows of shelves lined every inch of the room; thousands upon thousands of books, and not an Internet connection in sight. Sam didn’t mind doing the research, but Google had become his crutch, and he felt handicapped without it.” I wonder how many of us would want to give up some of today’s nicer benefits in favor of heading to a technologically-simpler time in America?

Maybe I’ve been wrong to skip TV-and-movie tie-in fiction this long, because Supernatural: War of the Sons was a fun read. If you want to learn a bit more about the world of Supernatural and take a tour of the 1950s with the Winchesters, I highly recommend you give it a whirl!

p.s. Check out these Supernatural books!