It’s been a long time since I’ve been enthusiastic about the state of urban fantasy or horror. Back in the 1990s, I discovered Anne Rice‘s gothic world of vampires, witches, and other creatures who go bump in the night. Rice had a gift for immersing you in her world with rich settings and characters you could sink your teeth into. Add to that classic urban fantasy books like War of the Oaks by Emma Bull, Neverwhere and American Gods by Neil Gaiman, and The Dresden Files by Jim Butcher and you see the fantasy side of “urban fantasy”. Though there have been occasional releases here and there, new urban fantasy fiction seemed to be on a downturn. 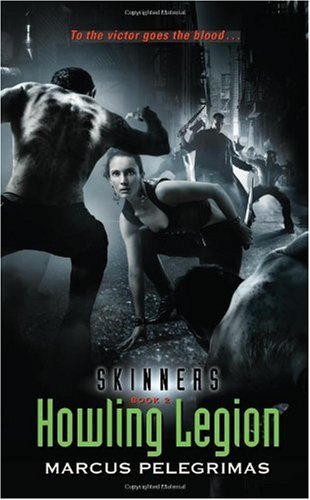 Now in the last couple of years, I’ve been reading books from Max Brooks (The Zombie Survival Guide and World War Z), Jonathan Maberry (Patient Zero) and Thomas Emson (Skarlet and Maneater). It’s been quite a resurgence in darker urban fantasy, almost horror, genre. I’m excited to say that the unmentionable things in the dark are on the rise in popular fiction.

Enter author Marcus Pelegrimas and his Skinners series, with the first book – Blood Blade – published in February 2009 and the second book – Howling Legion – released in November 2009. These books focus on a group of brave men and women known as Skinners and the battle they fight daily against the forces of darkness. Pelegrimas’ world is populated by monsters waiting to prey on us weak, unbelieving humans – vampires, werewolves, and other beings stalk the night and claim their rights to our world.

In Blood Blade, we’re introduced to game programmer Cole Warnecki. Cole decides to go on an adventurous hunting vacation and finds himself hunted by a werewolf instead. Our hero survives, but only barely… and is drawn into the world of Skinners seeking to fight back the forces of darkness. He must choose whether to cut and run or join the fight. And once he decidees, there is no turning back.

Now in Howling Legion, Cole and his trainer/partner Paige discover that the werewolves have discovered the secret… The vampires don’t really control the cities like they claimed. Full Blood werewolves begin a campaign to retake the world from the human vermin who have infested the plains and forests of the world they once controlled. Instead of fighting all the battles themselves, they infect poor human victims who become Half Breeds – misshapen mutts driven mad by pain and killer instincts.

With a huge situation building, the Cole and Paige seek the help of the Mongrels, a race of half-animal, half-human creatures who have fought the Full Bloods longer than the Skinners. The Mongrels don’t like Skinners either, but perhaps they can unite to fight the werewolf threat?

Pelegrimas has a tightly written story and a setting with history that goes back at least centuries, probably millennia. I found myself quickly engrossed in the world Cole finds himself in. Pelegrimas interweaves humor and action, passion and thrills, for a ride that grabbed me from page one. These books are fast, fun reads that have me eagerly waiting for the next book – Teeth of Beasts – due out sometime in April 2010.

Looking for some fun reading for the cold winter months? Check out Marcus Pelegrimas’ Blood Blade and Howling Legion!

p.s. Pick up Pelegrimas’ books and others from Amazon below!