Back in the 1980s when I was growing up, I remember watching television shows like That’s Incredible with Fran Tarkenton and Ripley’s Believe It or Not! with Jack Palance and gaping in wonderment as these bizarre stories came to light. All of these strange events, places, and people found all over the world doing the most amazing and insane things! Just the stuff a youngster needed to be watching on television. 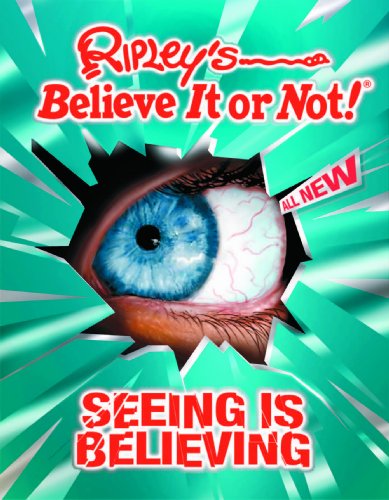 So when Ripley’s Believe It or Not!: Seeing is Believing was released back in August, I had to check it out. As with most books about weird, unusual, or unbelievable topics – this one did not disappoint. In fact, it provides an absolutely enormous number of facts in twelve broad categories: Strange But True, Extreme Earth, Incredible Feats, Unusual Customs, Crazy Creatures, Travel Tales, Fantastic Food, Body Oddity, Strange Sites, Artistic License, Amazing Science, and Beyond Belief.

When I would flip through the book, I would dwell on each page for quite a long time as I devoured all the tasty morsels of information. My two daughters were fascinated at the wide array of pictures and odd animal facts and would help me work my way through them all. This is the type of book that should be chewed through slowly. I attemtped to plow through the whole thing in a night and was quickly overrun by dates, figures, and names.

From the very beginning of the book, you’re bombarded with the bizarre. I grew up playing Scrabble with my Mom regularly and am still fond of the game, though I rarely play these days. However, can you imagine playing while skydiving? Or with lions or alligators watching? These people are either dedicated or insane, I can’t tell which.

Later in the book you read about a lucky dog hit by a car so hard that it became stuck in the grill. Amazingly, the dog only suffered a broken leg and fully recovered. How did the dog survive such a near tragedy and how did the Ripley’s group hear about it I wonder?

You also read about a woman in Washington State who had a birthday cake for her husband made in the shape of a dragon. Made from chocolate and vanilla with a chocolate buttercream filling – it took 12 hours to complete. I would imagine it took considerably less time to consume at the birthday party.

All told, the book is 254 pages long with beautiful full color photographs and illustrations as well as a ten page index so you can look things up. It’s beautifully laid out with a hardcover binding and should survive for many years as a reference of the weird, strange, and bizarre at my house!

If you, like Robert Ripley, have a love for the wonderful world of the weird, be sure to check out Ripley’s Believe It or Not!: Seeing is Believing at your favorite library or bookstore. I bet you’ll be amazed, grossed out, and shocked at some of the facts you find between the covers!

p.s. Pick up this book and others at Amazon below!