When you start a book with a short first chapter, you’d better make it memorable. For Patient Zero author Jonathan Maberry introduces us to our hero, Joe Ledger, with two sentences:

And there’s nothing wrong with my skills.” 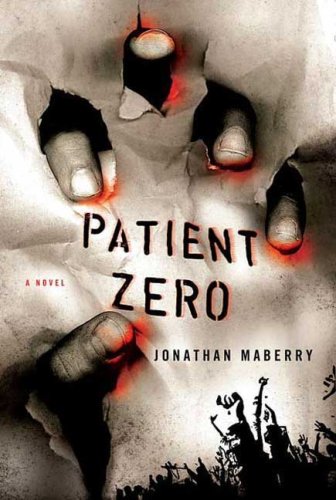 From that point forward, I was hooked. Joe Ledger is a detective in Baltimore who’s spent the last year and a half involved in a task force comprised of various police departments and Federal agencies. The task force was assigned to keep tabs on a group of terrorists that may have been attempting to smuggle in some type of bioweapon. After 9/11, this is a scary, yet possible scenario I’m sure has been played out by many law enforcement personnel around the country.

When he gets picked up by a group of men with FBI credentials and taken to see a guy simply known as “Mr. Church”, he enters a whole different world. And there things start to get weird for Ledger. The trip turns out to be an interview for a federal agency that doesn’t exist – the Department of Military Sciences or DMS for short – and in order to get the job, he has to subdue a prisoner.

However, the prisoner turns out to be one of the terrorists he killed during a warehouse raid by the task force he was on. And though he was very dead (Ledger made sure) at the warehouse, this suspected terrorist was still trying to kill Ledger in an interview room – zombie style. That’s right – reanimated flesh intent on eating you and infecting you so you too become a member of the zombie army…

Maberry manages to do something I didn’t think was actually possible. He gave zombies a plausible reason for existing. And then he gives the secret to a group of terrorists intent on jihad.

In case you’re wondering, Ledger isn’t alone when he fights the zombies and terrorists. Mr. Church has an entire team of scientists and a small army working for him, including Major Grace Courtland of the British SAS, whom we become acquainted with.

I really don’t want to spoil the fun for you beyond saying I was hooked by this book from beginning to end. All too often when an author tries to merge the fantastic with aspects of the “real world,” we end up sacrificing something on either end to make the pieces fit together. Maberry managed to use the real world as a springboard to bring in zombies, neatly sidestepping the issues by using real science, real weapons, and real tactics to face the evils of bio-terrorism.

In addition, Maberry manages to work in some very funny scenes and quirks for his characters. For instance, Mr. Church always has cookies of various types with him – in his office or in meetings – and throughout the book Ledger munches on different cookies depending on the mood he’s in.

Another example of Maberry’s humor comes out in how he names his characters. One of the character’s names is “Bunny Rabbit” and the exchange goes like this as he introduces himself to Ledger…

“Bunny Rabbit, Force Recon, sir.”
…
“My last name is Rabbit. Everyone calls me Bunny.”
…
“It gets worse sir. My first name’s Harvey.”

In the story, the bad guys are bad. The good guys are good — most of them anyway. And along the way you keep wondering if Ledger will make it out alive from some of the situations he finds himself in. Suffice it to say he survives and I’ll be curious to see what Maberry has in store for Ledger and the rest of the DMS in the future.

The subtitle for Patient Zero is “A Joe Ledger Novel,” which implies to me that there will be other Joe Ledger novels. If so, sign me up. I want to see where Maberry takes his world next.

Be sure to check out Patient Zero at your favorite bookstore or online retailer. It’s great for summer reading, especially if you like zombies!

p.s. Pick up Patient Zero at your favorite local bookstore or at Amazon: