Vampires. In popular media today, vampires are more about masquerading as human in a human world than ripping your throat out and guzzling blood directly from your jugular vein with no pretense of any remaining humanity. These days, the word “vampire” tends to evoke images of wan, whiny teenagers or Civil War-era Louisiana gentlemen more than “cold blooded killers.”

Author Thomas Emson is working to change that. First with Skarlet in 2009 and now with the follow-up Krimson, Emson is embracing the monster in the vampire myth and providing hooks to thousands of years of history. And like the majority of human history, not all the monsters are inhuman. Sometimes it takes power-mad humans to resurrect the past even if they don’t quite understand the consequences of their actions…

In Skarlet, we were introduced to a modern-day London, England on the brink of change. A small group of men and women with bloodlines stretching back thousands of years have brought a drug to London’s youth. Distributed at a dance club called Religion, those who take the drug die and are reborn as vampiric killing machines with an unquenchable thirst for blood. One man – Iraqi war vet Jake Lawton – working as a bouncer at the club is drawn into this nightmare nobody can accept and fights against the monsters with a few companions he gains along the way.

What I loved about the first book was the use of multiple story lines from different eras of history. Emson incorporates the conquering of Babylon by Alexander the Great and battles between the Ottoman Turks and the British army in the 1920s alongside the Iraq War we’re still trying to finish and the modern day. Weaving in an alternate history based on real events made this a much more tangible tale to dive into. 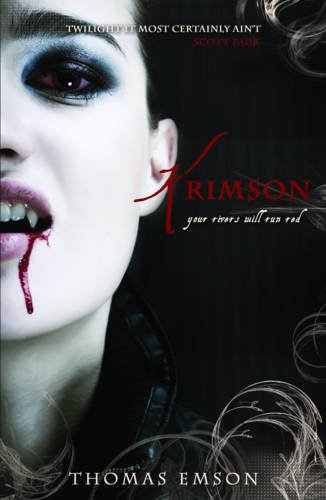 Now with Krimson, the second book in the Vampire Trinity series, the story picks up three years later after the events of Skarlet. Jake is still fighting the good fight, but he’s getting tired. You can only go so long without sleep. And those left alive in positions of power in England are hunting him day and night, so his paranoia isn’t just due to exhaustion. He and his warrior woman Aaliyah have done damage to the vampire cause, but it’s like putting fingers in a dam about to burst – it’s impossible to cover all the cracks.

And like Skarlet, Emson does an amazing job of working an alternate history into the mix. This time it’s ancient Babylon and the time of Dracula in the mid-1400s. And though I wasn’t as surprised by the Babylon links this time around, I was very intrigued in how the Dracula myths were brought in. Again, the history set the stage for the events in the present day and was seamlessly integrated into what started in that first book.

After reading Zombie Brittanica, I was a bit concerned that Emson had lost his touch. However, that doesn’t seem to be the case. The first half of Krimson sets the stage and offers enough background that readers new to the series should have no problems diving in. For me, the action really didn’t get going until about the half-way mark. At that point it was as though a switch was thrown and we were in free fall to the end. All the characters of the first book are back and we start to see their individual threads get resolved one by one…

I can hardly wait for Kardinal, the conclusion of the trilogy, to be released in another year or two. Can Jake and his friends survive? Only Emson himself knows until the book is released!

If you want a taste of the book, be sure to check out the first three chapters at Thomas Emson’s website. Unfortunately US rights haven’t yet been sold, but you can order via Amazon and other retailers through international wholesalers!

p.s. Pick up these books at Amazon below!