While reading Know It All: The Little Book of Essential Knowledge by by Susan Aldridge, Elizabeth King Humphrey, and Julie Whitake, it quickly became very apparent that I don’t know nearly as much as I thought I did. Even with all the trivia floating around in my brain, this book contains more useful facts in a quick, all in one place, easy to access manner, that I might be able to give up Google for a while. (Maybe not, I love searching on Google!) 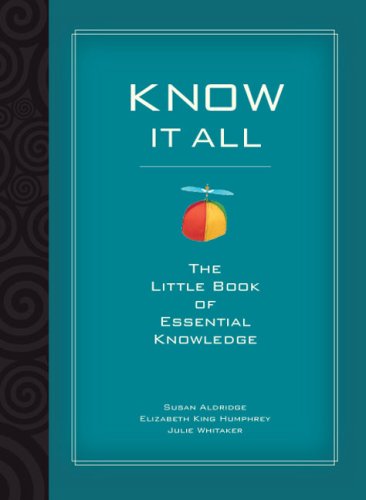 Know It All is a perfect introduction to a wide array of subjects for students, parents, teachers, and anyone else seeking a better understanding of nearly 100 diverse topics from science to history, art, and religion.

Each chapter focuses on 10 to 15 entries and ends with a brief quiz so you can test your knowledge to see how much stuck with you after reading. Chapter 10 provides the final exam as a test over all the material from the entire book. Though I don’t take many tests any more, I see this as a great supplement for home schooled kids to provide yet another level of feedback on reading and retention.

The nine chapters focus on the following broad topics:

Even if you skip the tests throughout the book, each chapter gives a great overview of each subject. Interested in just a particular topic? Search the detailed four page index at the end of the book.

Is this book a complete reference on everything it covers? Not even close – but that’s not the goal. The book serves as a starting point or introduction to the topics covered. From there you can branch out at your local library, bookstore, or on the Internet to dig deeper.

A few of the surprising facts I learned from the book included:

Know It All: The Little Book of Essential Knowledge is a great book to have in the house for parents of elementary, middle school, or even high school students to serve as a great starting point for reports and research. But more than that, it’s a great way to learn or relearn some of those facts that may have escaped some of us since we were last in school ourselves!

To give you a better idea of the great content within this book, I’ve included a brief excerpt below with permission.

The Religions of the World
The map of world religions reflects the political and social history of humankind. Eternal quests for meaning, along with conquests, migration, trade, and evangelistic fervor have helped to shape the beliefs of nations and peoples alike.
Every human society has had some form of religious belief or practice. In simplest terms, religion is the belief that the world is inspired and directed by a superhuman power of some type.
Christianity, with some 2.1 billion followers, is the largest of the world’s religions. Though it originally began in the Middle East, Christianity is no longer the dominant faith there. It is, however, the predominant religion in much of Europe and in North and South America.
Like some other religions, Christianity is divided into a number of different churches: In Russia, Orthodox Christianity is the leading religion. In South America, most Christians are Roman Catholics, and the same holds true in southern Europe.
Protestantism is more prevalent in both northern Europe and North America. With more than 1.5 billion adherents, Islam is the world’s second most popular faith. Following the faith are most people of
the Middle East and North Africa, a significant number in South and Southeast Asia, and long-standing minorities in the Balkans and eastern Europe. An influx of immigrants from former European colonies has seen the number of Muslims in Western Europe rise in recent decades.
Hinduism, the world’s third largest religion, is prevalent in India, though large populations of Sikhs and Muslims can also be found on the Indian subcontinent.
Although Buddhism originated in India, the countries with the largest Buddhist populations are now China, Japan, and Southeast Asian states such as Vietnam and Thailand. Buddhism also has many followers in the Western world.
A notable exception to the dominance of Islam throughout the Middle East is Israel. Large populations of Jews are also found across Europe and North America, the latter home to more than 40 percent of the world’s Jews. In fact, New York City has the second largest population of Jews of any city in the world, after Tel Aviv.
The United States is unusual for a developed nation in that a greater than usual proportion of its population holds religious beliefs, most commonly Protestant Christianity.
South America is predominantly a Catholic Christian continent. This is a legacy of the Spanish and Portugese Conquistadors, who brought the continent under colonial rule.
Africans retain many traditional religious practices in some regions. Christianity arrived more than two millennia ago, and Islam is the dominant religion of North Africa and West Africa.
India is a country of many religions. Four in every five Indians are Hindu, but there are also significant numbers of Muslims, Christians, Sikhs, Buddhists, and Jains.
Australia is primarily Christian; however, its indigenous religions, centered around a belief in the ancient “Dreamtime” of creation, are key to its culture.
The above excerpt is a digitally scanned reproduction of text from print. Although this excerpt has been proofread, occasional errors may appear due to the scanning process. Please refer to the finished book for accuracy.
The above is an excerpt from the book Know It All
A Reader’s Digest book published in association with Quid Publishing. Copyright © Quid Publishing 2008.

p.s. Check out this book at Amazon!