As a student of mythology, I have often found myself exploring myths of European or Native American peoples. But rarely have I had opportunity to catch a glimpse into the mindset of the myriad deities of the Chinese people. Like all peoples, the Chinese created myths about real or imagined people and places to provide examples of how customs and beliefs came to be. 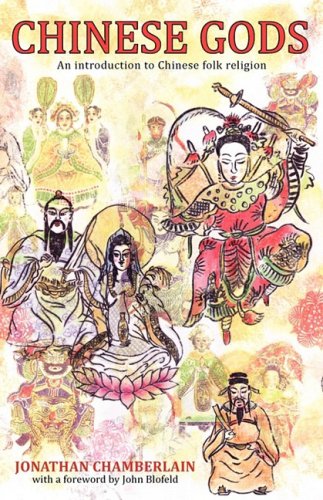 Chinese Gods provides amazing insight into some of the history of the China in the distant past, but also provides the reader more understanding of the Chinese people today. As the world gets smaller and smaller through the overwhelming use of technology, it’s good to read about Chinese legends of both historical and mythological people and places.

For example, Chamberlain goes into great detail in the first chapter about the geomantic science of fung-shui, which deals with using the energy of the environment to encourage or discourage various psychological effects. In the modern world, fung-shui has become very chic among the wealthy and famous to arrange their humble abodes to go with the flow instead of against it.

As far back as 3000 years ago, the magic square upon which many of the principles of fung-shui rely was discovered by the Chinese. Other cultures, from India and Egypt to Ireland, have also used the magic square. Generally it is found in ancient (and probably some modern) architecture in the design of temples and palaces. Symbolism is attached to the different cardinal points of the compass: south is summer and life; north, winter and death; east, spring and harmony; and west, autumn and harmony. In fung-shui, the door always points south, regardless of the actual compass direction.

Using this information as a guide, see if your house flows positive energy in the right direction of various rooms. I know mine doesn’t!

Chamberlain goes on to discuss many of the famous people in Chinese literature, such as Lao Tzu and Confucius. And once you have a general idea of some of the symbology underlying everything in China, the core of the book is about the many major gods of the Chinese pantheon. From the God of War to the Queen of Heaven and everything in-between, he tells not only of their roles among the gods and in the homes of those who would appease them but also about their history and origins.

I am personally ready to put up a small shrine to Ts’ai Shen, god of wealth. I would hope that Ts’ai Chen, if I arrange my life according to Chinese principles of ancestor worship and the magic square, might grant me the riches to do what I want to do with my life so I can provide for my family. If not, I might provide offerings to the Monkey, the Great Sage, who might upset the balance of beauracracies everywhere to help a bit more of the fortunes of heaven to trickle down to the masses.

However, I’m a horrible interior decorator (just ask my wife), so I’m guessing that my fung-shui won’t help much!

At any rate, if you’re interested in a bit of Chinese mythology, I’d definitely recommend that you check out Jonathan Chamberlain’s book Chinese Gods: An introduction to Chinese folk religion. It’s a great read and full of historical and philosophical information about a culture many of us in the United States at least know little about.

p.s. Be sure to pick up Chinese Gods: An introduction to Chinese folk religion at Amazon!