What if Mulder was right on all those episodes of The X-Files? What if there was a huge alien conspiracy using human beings as lab rats? This is the question author James Murdoch explores in his book Gray Apocalypse.

Michael Kendon used to work for the enemy, a grand organization created by a conspiracy between the secret government that really runs the world and the aliens who want to take our world for themselves. Kendon used to be an assassin, plugging “leaks” and solving “problems” that would crop up from time to time when information would seep out about this worldwide cover-up. 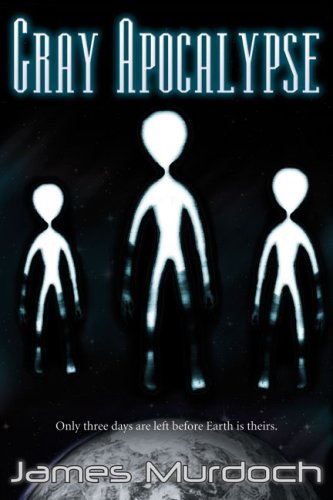 Then he met Donald Meller. Meller was part of a movement to stop the members of this “Collaboration” between humans and aliens bent on destroying the world and what? Well, honestly we never find out what the aliens are up to beyond kidnapping thousands of people, hiding them in underground bases, and using some of them to breed hybrids to do the aliens’ bidding. Yes, they’re bad, but what are they really up to?

That’s really my biggest problem with Gray Apocalypse. Murdoch creates an interesting problem, but only solves half of it I think. The aliens want to destroy the world by hitting it with a huge mountain-sized asteroid. Then they can use the humans and hybrids safely tucked away beneath the surface to do what? Redecorate it to better suit their alien masters’ sense of fashion?

Michael eventually joins forces with Laura Meller, Donald’s daughter, and the two of them work to smuggle an alien energy source and weapon across the country. Meanwhile, down in Puerto Rico, you have Eric Tepler, an astronomer, and his love interest, Gabriela Estrada, a high school teacher in Cabo Rojo, working to figure out how to stop an asteroid from hitting the earth. Between Michael, Laura, Eric, and Gabriela, they manage to gather the forces and resources to stop the alien collaborators from destroying our planet.

I’m not saying that I didn’t enjoy this novel. I did find myself rooting for the good guys and hoping that the aliens didn’t win. But the story had one big hole you could probably drive a truck through (or in this case, a huge asteroid). I never got a satisfactory answer about why the aliens were here in the first place or why they wanted to destroy most of the life on the planet.

The relationships in the story also left me scratching my head in places. For example, Michael kills Laura’s father in the opening chapter of the book. But when he tells her about it later, she doesn’t really react in a realistic manner. She closes her eyes, pauses a moment, and then keeps on going like nothing really happened. I know she hadn’t seen her father for 10 years or more, but I would have expected a stronger emotional reaction to learning that this man who has convinced you of the impending doom of the planet actually killed your father just a couple of days before.

Murdoch did leave the end of the novel open for a sequel. Perhaps in the next book we’ll start to uncover more of the mysteries of “The Collaboration” and figure out what the aliens were truly up to.

In some ways, this was a combination of the Larry Niven and Jerry Pournelle book Lucifer’s Hammer and a Battlestar Galactica (new, not old) style of conspiracy where the aliens live among us. Toss in a few cases of UFO paranoia from the X-Files and set the blender on “crush” and you almost have the plot.

For a first novel, Gray Apocalypse was really quite good. Murdoch came up with an interesting tale and heroes that were worth rooting for. That much bodes well for future projects. But I hope he learns to develop deeper characters and answer all the questions that he raises next time.

If you like alien conspiracies and doomsday plots, be sure to check out Gray Apocalypse at your local bookstore or online.

p.s. Pick it up at Amazon here: