In the decades I’ve been reading (nearly 40) and the nearly five years I’ve been reviewing books, I would never in a million years have predicted that these words would go together: Steampunk, Civil War, submarines, and zombies. And yet, Cherie Priest‘s novel Ganymede manages to pull them all together in a coherent and lively tale. 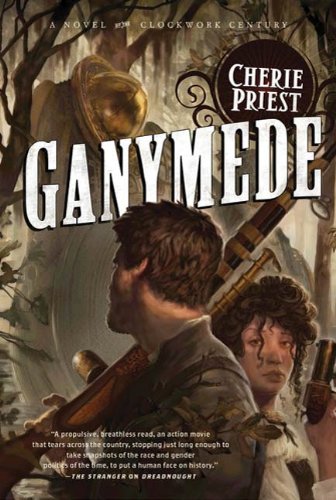 Andan Cly is an airship captain with a past. He’s smuggled guns, goods, and sap – a substance with some seriously undesirable long-term effects even if it does get you high. It’s worth a ton of money, but Cly wants to put it far behind him and try to stay on the straight and narrow. He’s working to change his ways, all for the love of a woman in the Seattle Underground. As such, he takes a job for a man who’s done some good for Seattle despite his shady sideline activities so he can afford to stay put for a while.

Josephine Early on the other hand isn’t planning on going anywhere. She just wants the Texans and the war out of her city of New Orleans. And as a Union spy, she’s well positioned as a brothel owner to hear things and pass them along to her allies among the pirates and the Union army. It just so happens that one of those secrets was about a submerged vessel at the bottom of Lake Pontchartrain that could change the course of the war and give the North a fighting chance. The only problem is finding a pilot skilled enough, talented enough, or crazy enough to get it out of the lake, down the Mississippi, and into the Gulf under the noses of the Texans.

Turns out Early and Cly had a bit of history together from a decade before and Miss Josephine is desperate enough to send a telegraph to the pirate with an enticing offer and not much detail. When Cly gets the message, he figures he might as well do two jobs while in New Orleans… And when they get together, the sparks fly again. From the time Cly gets the telegraph to the end of the book, the heat between them and memories each has of the other provides some great romantic tension to the story. But that’s only part of the story. Priest manages to work in pirates, airship battles, zombies, and voodoo into the tapestry of her alternate history of the Civil War.

I was intrigued from the first few pages of Ganymede and it held my interest throughout. For some reason I’ve avoided the whole Steampunk movement in literature so far, but after getting a taste of Priest’s world, I’m going to have to start reading her Clockwork Century series to see what I’ve been missing. Ganymede follows the two earlier books in the series – Boneshaker and Dreadnought – but is a standalone novel in that setting. Boneshaker won the Locus Award for Best Science Fiction and was also nominated for both a Hugo and a Nebula.

Ganymede is on bookstore shelves now and I’d encourage you to give it a read. Whether you’ve been on the fence about the whole Steampunk movement or have known about it a while, Priest’s writing style makes it easy to slip into the clockwork world Early & Cly inhabit. For more about Cherie Priest, you can also check out her website at CheriePriest.com.